This has to be hands down one of the most romantic videos and be prepared this one is definitely a tearjerker! As you will see the talented team at Phosart Photography & Cinematography helped Yiannis to surprise Loukia with the most amazing proposal ever… you just have to see this! 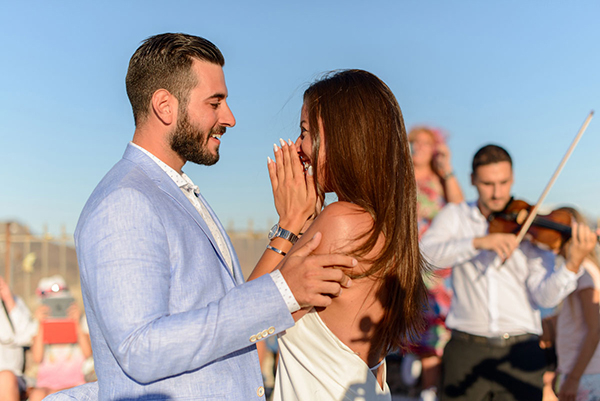 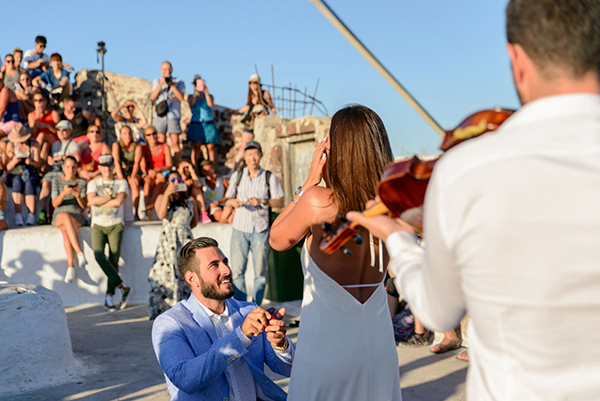 Their amazing love story: “Loukia and I first met on an island in the Aegean Sea called Andros, Greece. I was on a summer vacation there. Loukia also vacationed there for 5 summers in a row. We had never crossed paths before. With work and my business in my mind going on in New York, it made it difficult to enjoy my vacation. I purchased a ticket halfway through my trip to return to New York. My flight for the early ticket ended up getting cancelled and I decided to stay till the end of my trip in Andros. One night out I walked outside the bar we were in and that exact moment Loukia was walking out of the place next door. Once I laid my eyes on her and our eyes met, it was as if time stopped and the world stood still. I walked up to her and said “Hi” she replied “Hi” back. We were both stuck in the moment. We spoke for a little bit exchanged phone numbers and decided to meet on the following day. I lived on the opposite side of the island. The next day I had got ready excited to go to meet her up and my car battery decides to die that morning and the only mechanic on the island was on holiday. Just my luck! I had another car but it was not legally insured to drive. I made the decision to take the risk and take it. But what’s life without risk? I ended up meeting up with Loukia& her best friend Eleni for an amazing ocean view dinner then we went for drinks after that. Loukia and I clicked right away. In the midst of the night I realized she was THE ONE! While dancing with her I looked at her and whispered in her ear that I’m going to marry her one day … She hugged and kissed me and started tearing. Unfortunately, her vacation was at an end and was leaving the following morning for Athens. It didn’t take long for me to be in Athens after that before it was my turn to head out to New York. I wanted to miss my flight on purpose to stay longer with her but I couldn’t. After returning to New York, my mind wouldn’t stop thinking about Loukia. I couldn’t focus on work or anything around me. I was IN LOVE! I lasted 1 month away and decided to buy a ticket to Athens and go surprise her at her job. I don’t know who was more nervous. As I walked into the Pharmacy where worked, she was helping a client and as soon as she saw me she went into shock, the client continued to talk about her prescription while Loukia was frozen! I didn’t know whether to laugh or be concerned that I gave her a heart attack ! We ended up doing the long distance back and forth for over a year and made it work. It wasn’t easy but it was definitely worth every second. If my flight never got canceled, I would have never met my soulmate. Everything happens for a reason…” 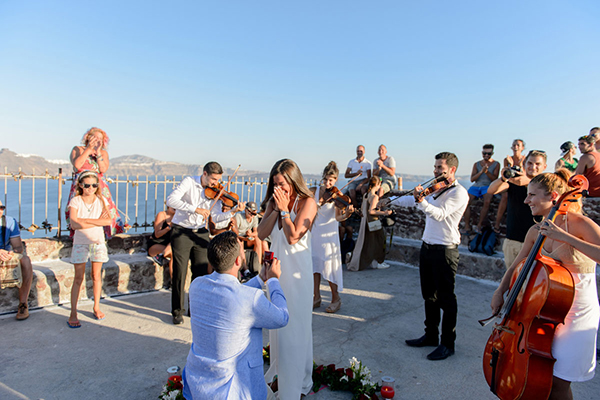 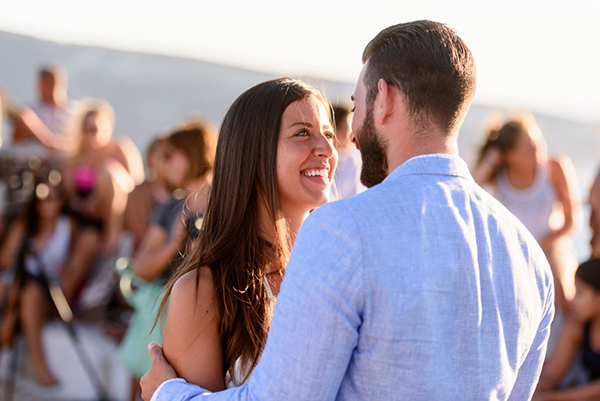 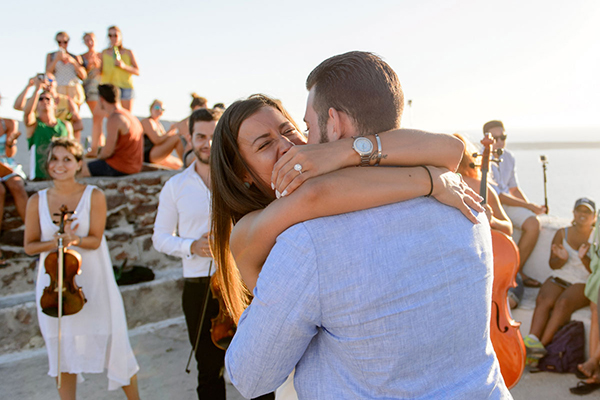 “I chose Santorini as my destination for my proposal because we had plan a Greece Island hopping for our summer vacation and one of the islands was Santorini, one of the most beautiful islands in all of the world! It is the island of romance and breathtaking sunsets. So I thought to myself where else better than this! Santorini has a secret magic to it. It’s beauty and vibe is indescribable by words. You have to experience it to believe it.” 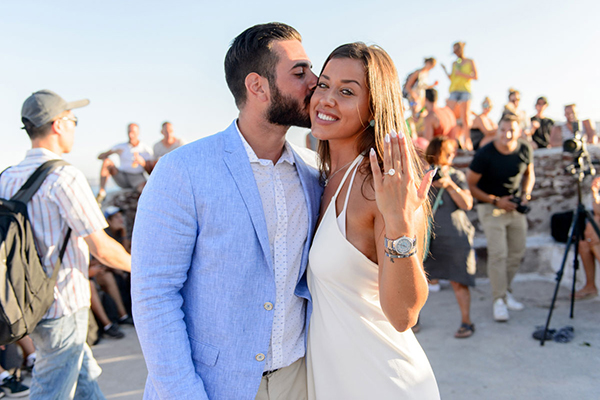 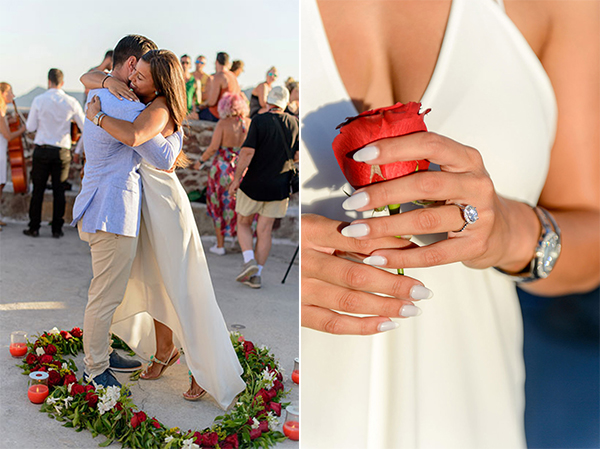 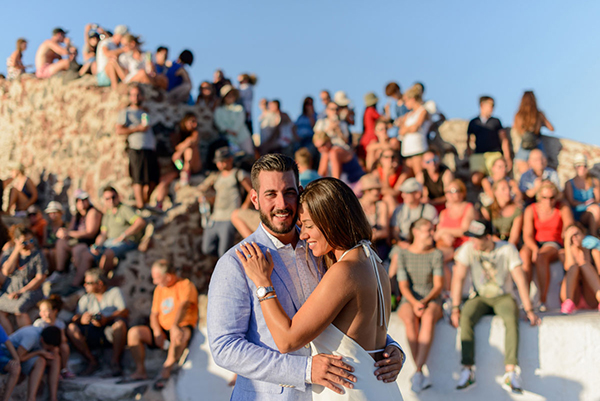 “Our proposal was a million times better than I had expected it to turn out. George and the team Phosart helped me create a scenario for the proposal. I decided on our anniversary day August 17th. I had told Loukia to buy a beautiful dress for our anniversary because I had a special surprise planned. The day comes of the engagement, I told her we had reservations at an amazing restaurant in Oia, Santorini to celebrate. What she didn’t know was that George and Team Studio Phosart was staging as photographers for set up couples photo shoot before dinner! She got excited hearing about the photo shoot. We met with George and George in Oia and went around to different locations to take the perfect photos. Loukia in her model state of mind didn’t realize how anxious and nervous I was. At one stage George took me around the corner to hook me up to a mic in my blazer to get audio while they recorded this whole scenario. We ended up at the final meeting point “The Castle” which is the ultimate viewing point people travel from around the world to see the amazing Santorini sunset. We had organized 4 musicians from Athens to come to Santorini to play our song (Calvin Harris : How Deep Is Your Love? ). As George was photographing Loukia with her back turned towards the sunset, our planners set the heart of roses and candles in the center of the castle. Holding Loukia’s hand walking toward the heart, the musicians came out of the crowd playing our song and having the crowd cheering, clapping and taking pictures was like it was Yankee Stadium behind us the moment it happened. I put Loukia in the heart and as soon the musicians finished playing our song I dropped to my knee and asked her to marry me. The best moment and feeling of my life.”