Today, we’re sharing with you a dreamy surprise wedding proposal at the beach! Horatiu decided to create the perfect scene for his love at the beach to ask her to be his wife and spend their lives together. The amazing team of Ask Her in Greece helped him to make this vision a reality and the result was just magical! The combination of the view, the deep blue sea and the pedals on the ground created the perfect, romantic scene. A bouquet of her favorite flowers, pink peonies, was waiting for her and the proposal went as it was planned. Such a sweet and unique idea that every girl dreams! 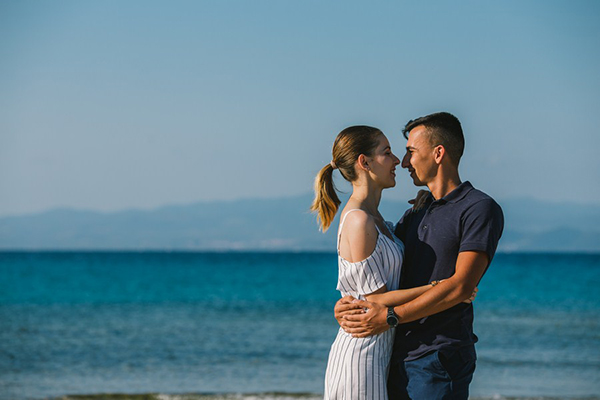 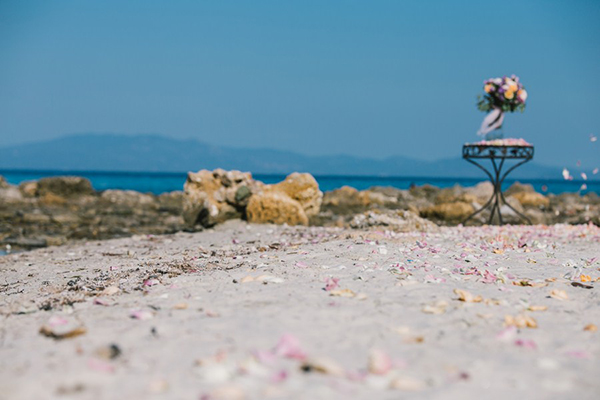 “My wedding proposal was amazing. I didn’t expect it at all. We were just walking down the beach, just like we used to do every day, I saw the pedals on the beach, but I thought there was another wedding and the photos were taken (like we saw the day before). For my surprise there where my favorite flowers, the bouquet was mine and he asked me to by his side for life. I’ve always dreamed about my proposal, but I’ve never imagined this beautiful. What I like the most is that we lived the moment, but we have photos to relive the moment again and again”, Diana shared with us. 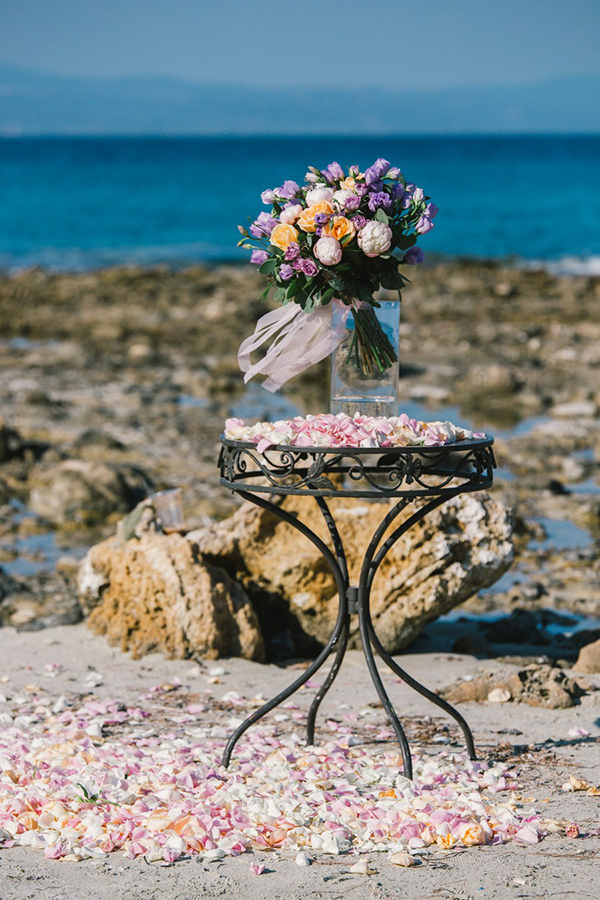 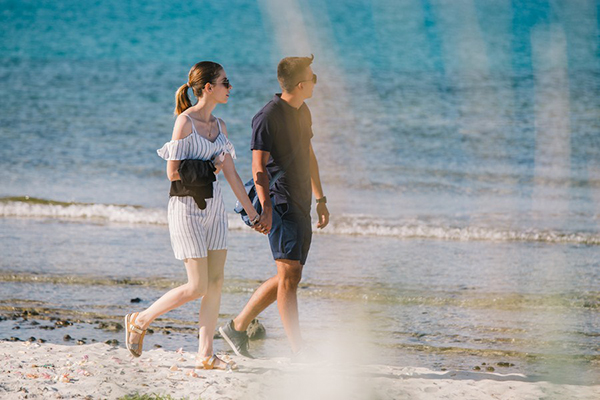 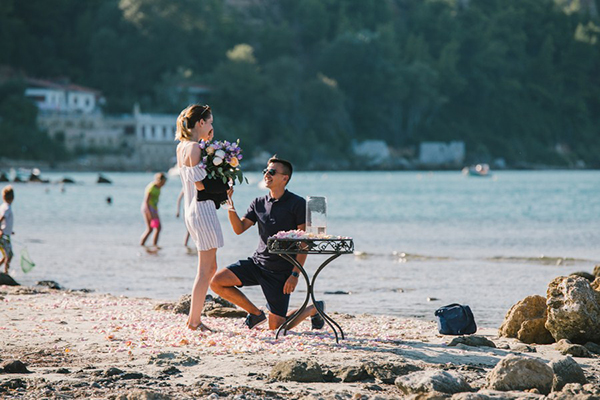 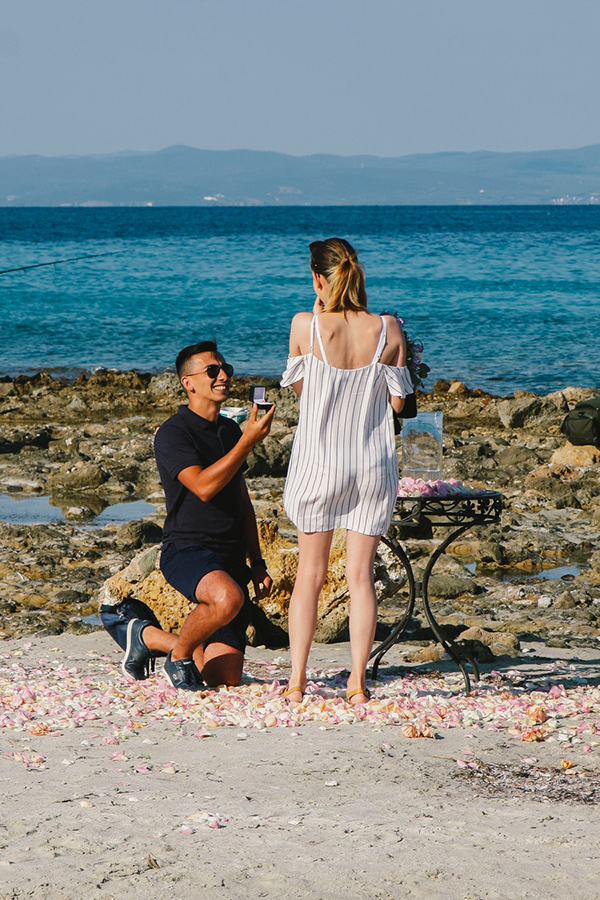 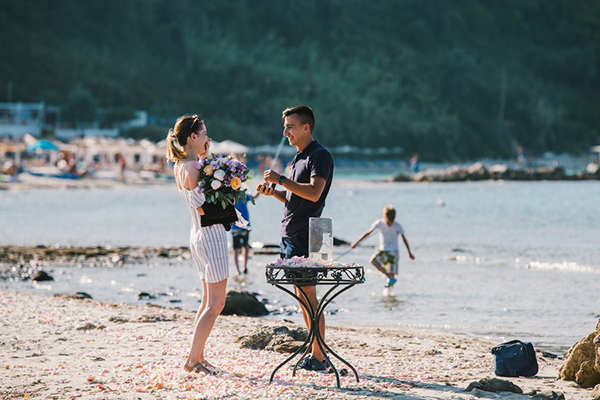 “I would recommend the amazing Ask Her In Greece team who organized the proposal to everyone who want’s something different than an usual proposal. The memories will stay with us our entire life and we have amazing photos to show our kids and grandchildren.” 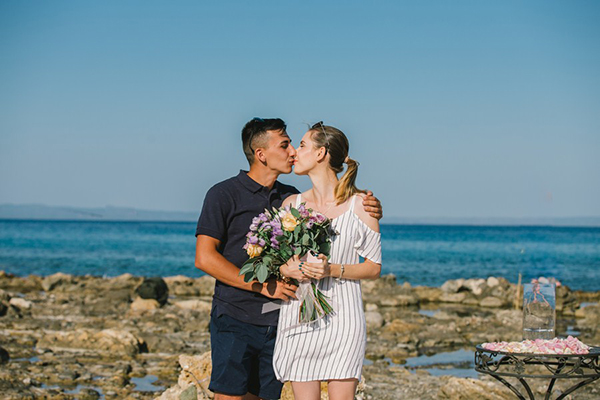 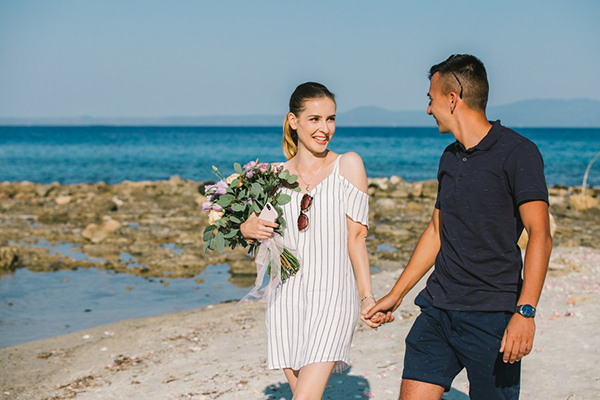 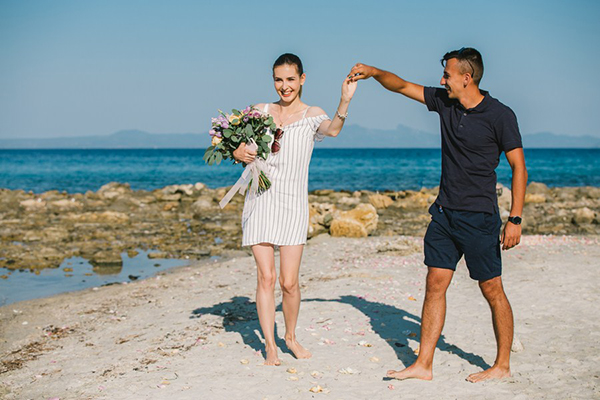 From Ask Her in Greece: “The couple is from Romania and 10 days before they arrived to Chalkidiki for holidays, Horatiu had contacted us and asked to arrange a surprise wedding proposal for his girlfriend, Diana Maria. We made sure to learn some things about Diana e.g. which flowers are her favourite and which colour she loves, to create a setting she would like a lot. Horatiu asked us to create a romantic atmosphere and to suggest a point with a view for the proposal. We chose together the date and we planned something 100% customized to the couple’s taste”. 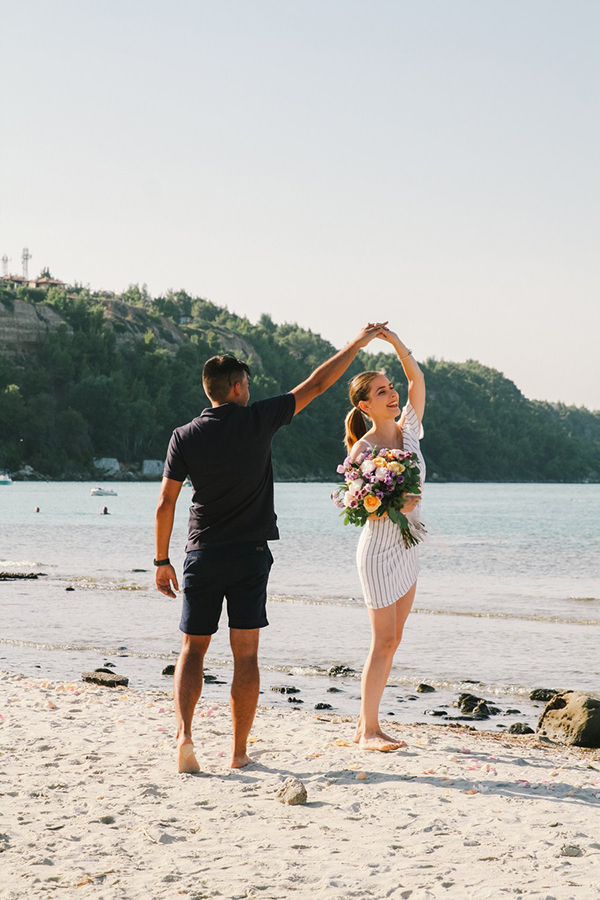 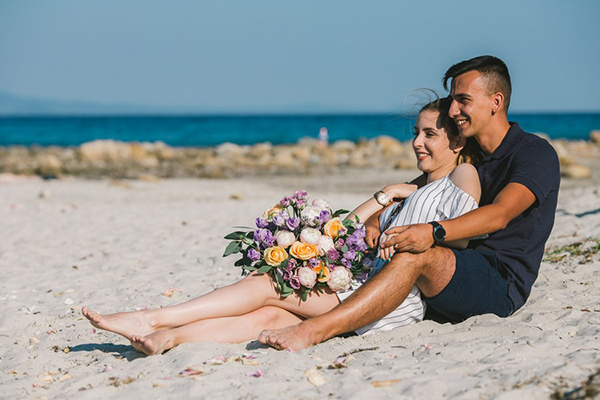 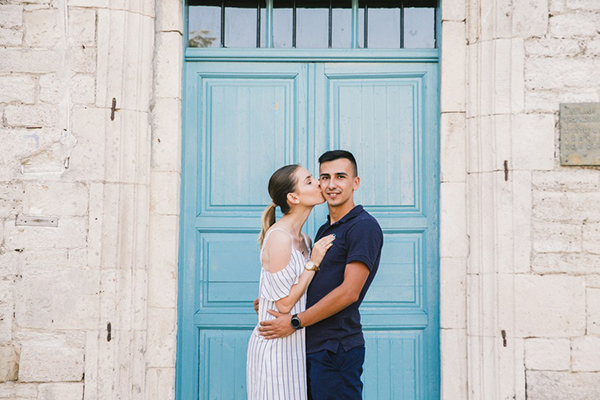 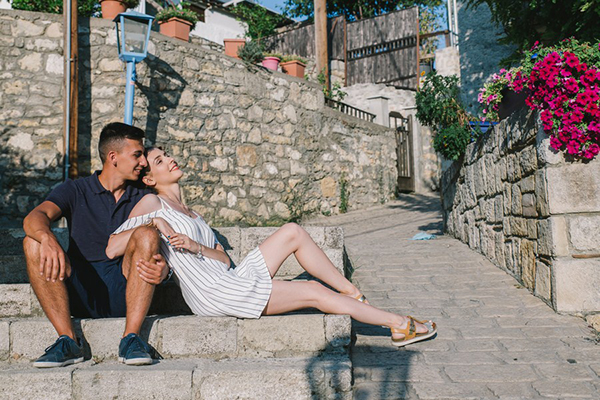 “Horatiu chose Athytos and specifically the beach to propose to Diana. The beach was covered with rose petals and as they were approaching, petals were creating a carpet where Horatiu would kneel and propose to his love! A bouquet with pink peonies was there, so that Horatiu would offer it to Diana Maria. Photographer, Maria Mintsidou was already there, capturing the moment from a distance so that Diana would not find out about the proposal. Horariu kneeled and asked Diana to marry him… After leaving them alone for a few minutes, our team approached and the 90’ photoshoot for their album, which they can share with friends and family and that will remind them of that moment for ever, started. Then, they had a romantic dinner at Blue Bay Hotel Afitos overlooking the sunset. The table was set with beautiful dinnerware and white linen and we added flowers and candles to make it even more romantic”. 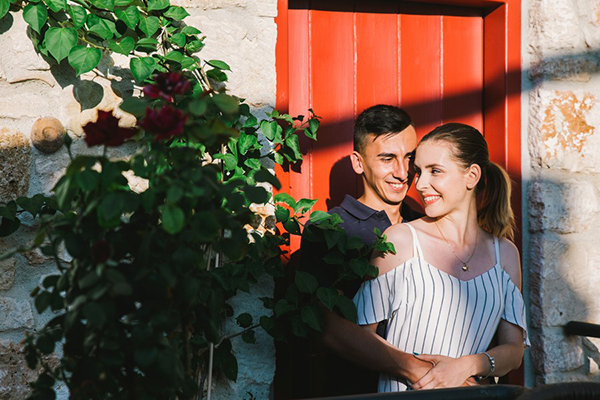 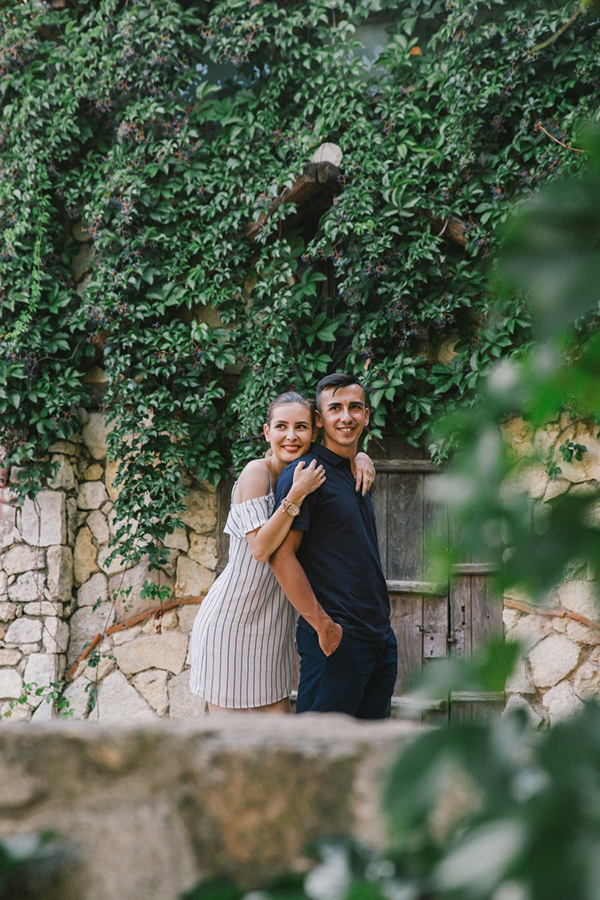 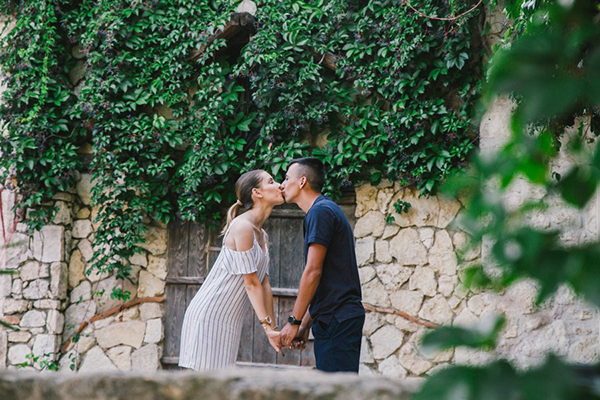