Get ready to feel completely transported to a magical place where natural beauty dominates. Whitney and Evans decided to have a gorgeous wedding at the beach with a relaxed style and white and green color tones. After the unique ceremony, the couple and the guests spent their time celebrating the wedding at a restaurant with a beautiful view. The romantic decoration, the atmospheric lighting and the sea made the perfect combo. Go ahead and get lost in these daydream photos captured by Sotiris Tsakanikas! 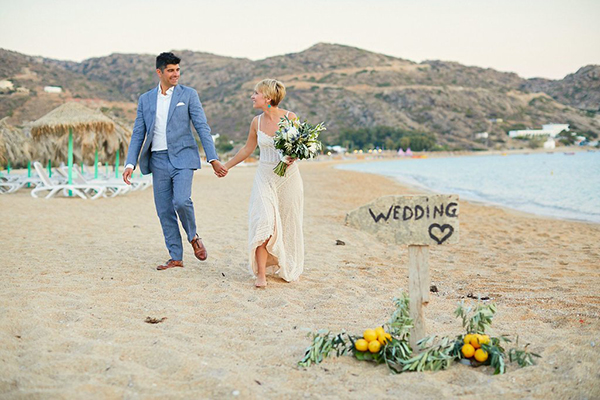 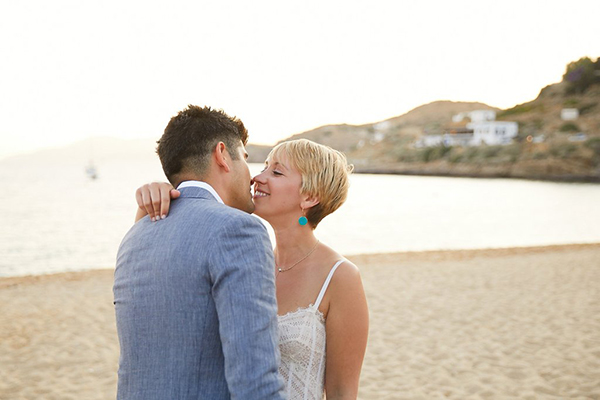 The bride shared with us: “On June 22, I was on my way to a bar in Washington, DC with my housemates. When we were switching trains at Metro Center, we ran into a New Guy joining the party. We got to our stop and were heading out of the metro to the bar when I realized that New Guy wasn’t with us. I looked around and saw him confidently striding off the wrong way. Assuming he was drunk, and in need of assistance, I snapped my fingers and politely shouted “yo – new kid – this way” and continued to the bar with the group…apparently Evan was not drunk and did not believe he was in need of assistance, although he was, and did not appreciate this…feedback… Flash forward to a few hours later and it’s time to leave the bar. I had just gotten another drink when New Guy came by and said “everyone else is ready to go – are you going to drink that all night”? I finished the drink, slid him the empty glass across the bar, and I said “we can go.” And that, folks, is the day we met, our anniversary, and we got married ten years to the day later.” 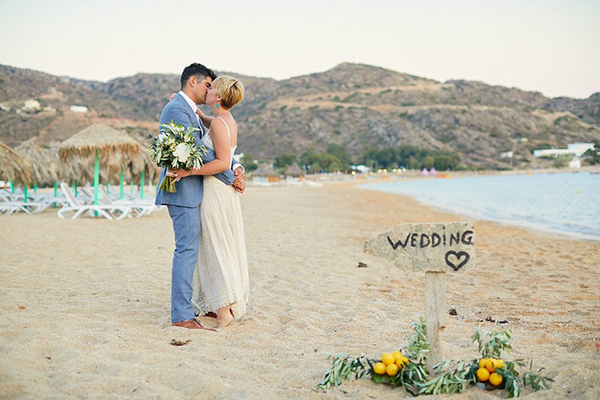 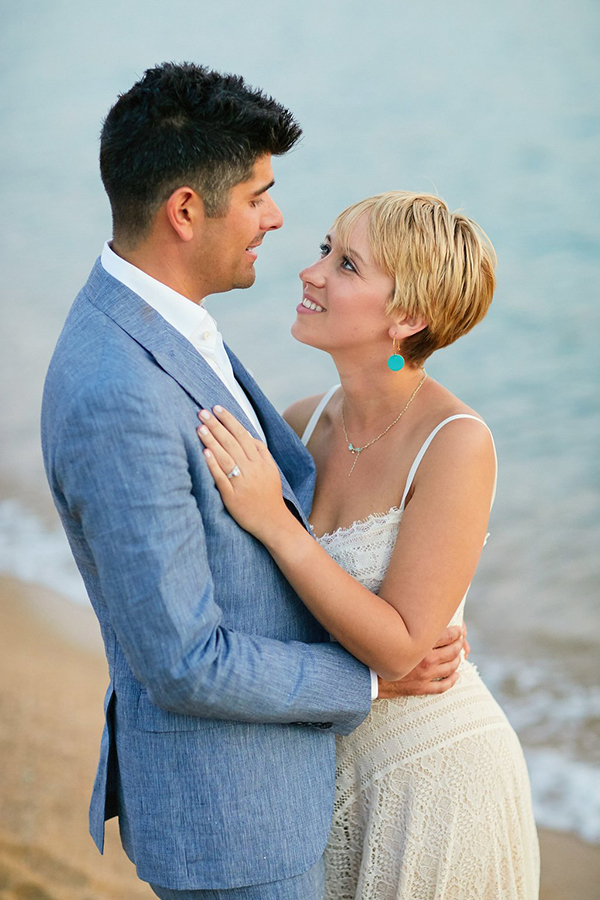 “Evan proposed on January 3, 2016 during an incredible vacation in the Maldives. It was a scuba diving trip in a beautiful place, so he had lots of great plans to propose. We were on an overnight boat trip to a beautiful snorkeling island, and Evan was going to do it on the top of the boat under the stars, but I got seasick and took some medicine the boat crew gave me and fell asleep in my dinner plate. So he had to come up with a new plan. The next day we went to the island to snorkel, and Evan had the ring tied to his swim shorts with dental floss. He found a perfect shell and he was going to tie it to the shell in the water and tell me to come look at a cool fish, but then the boat captain told us all it was time to go home so he had to abandon that plan too. Finally, we had reservations for dinner at a lovely restaurant on the island, and they put us at a table out on the sand all by ourselves. Evan was trying to be sneaky, but the waiter ruined it. Evan looked at the wine menu and asked me if prosecco was ok or if I wanted to splurge on champagne, and I said prosecco was fine. He pointed at one of the bottles on the menu, that I couldn’t see, and told the waiter “Yes, we’ll just have that one”. The waiter nodded and left, then came back a minute later to say “Sir, you wanted the Dom Perignon?” I pretended not to hear, and Evan said yes. The waiter left, and Evan pulled a ring from his pocket and asked me what I was most excited for in the next year. While I was thinking about it he said “because I think it should start with this” and pulled the ring out of his pocket. At that exact moment the waiter walked back up with a basket of bread. Then he saw what was happening and ran away. He did come back later to take a lovely photo for us.” 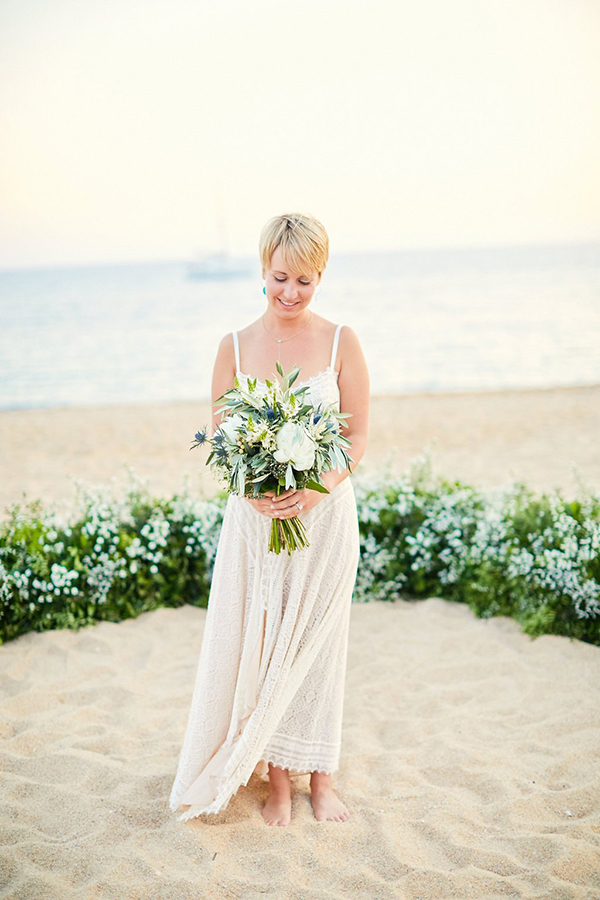 “We fell in love with Ios in 2011. We were living in Athens at the time, and were taking a trip that was supposed to be to Santorini, Folegandros, Ios, and Mykonos. We were supposed to spend 3 days on Ios. Instead, we saved Mykonos for a later trip, extended our stay on Ios, and spent 10 wonderful days there getting scuba certified and getting to know the island. It’s a very special place to us, and it was important to us to be able to share it with our friends and family.” 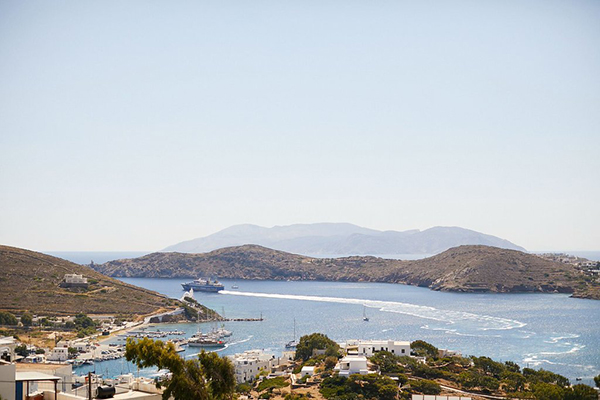 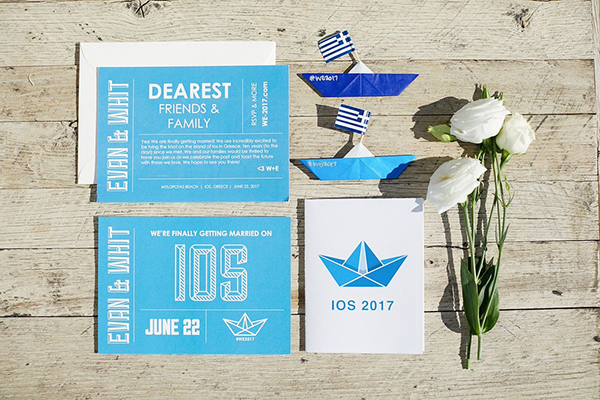 “For our wedding decoration we worked with Studio 7 for flowers, and Sounds Good for lighting. They were both amazing. We kept everything natural in decoration – lots of white and green. We wanted to accentuate the beauty of Ios, not distract from it.” 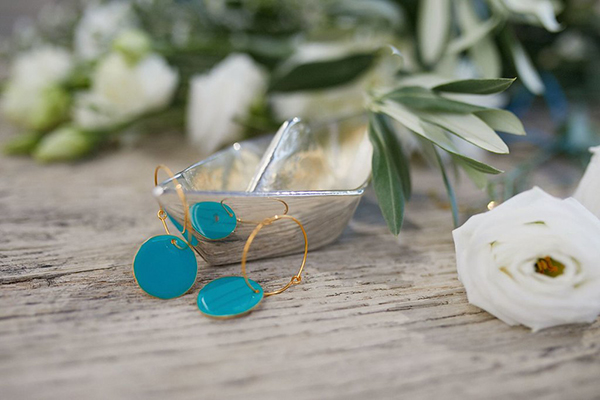 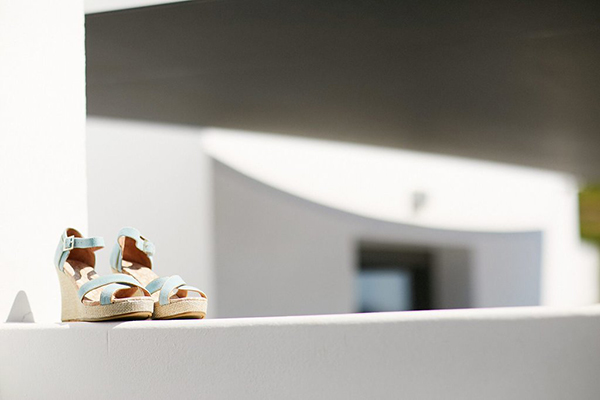 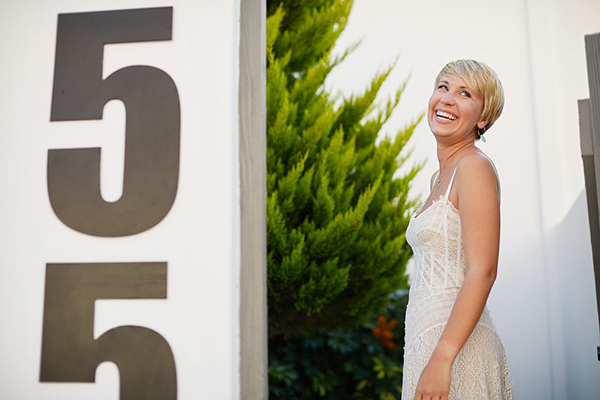 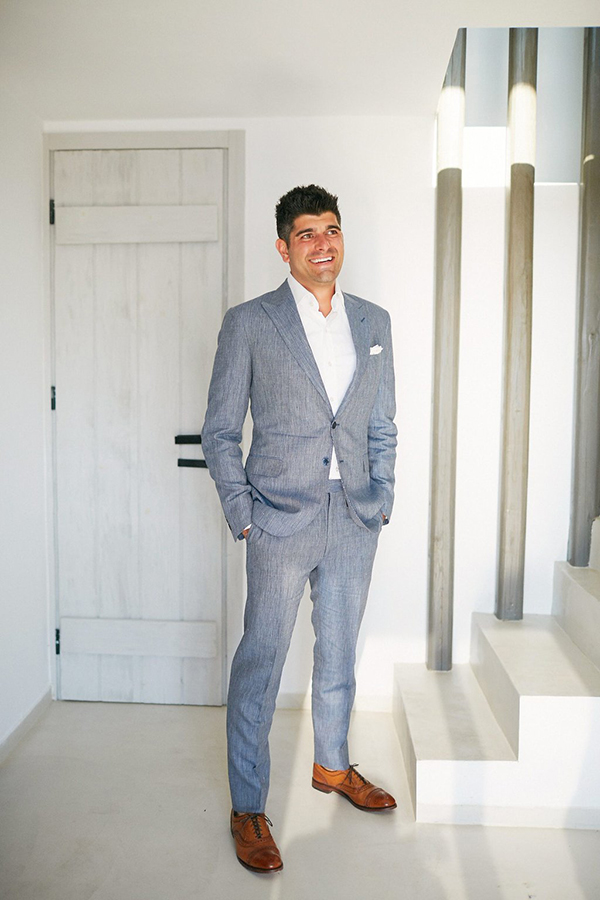 “Evan knew he didn’t want to have a traditional ceremony, so that was the basis of everything else. We knew we wanted to focus on our guests and on Ios, not on ourselves. So we pulled inspiration from lots of places – conferences we had been to, summer camp, great vacations, and of course other weddings we had attended. We wanted to do as much ourselves as possible, partly to control costs but also because we thought it would be more meaningful. We created themed bandanas to send to everyone in advance so they could find each other on the ferry, we had themed canvas welcome bags filled with embroidered Turkish towels, thin, so easy to pack, we had made locally in California, and with koulourakia from our favorite bakery in Glyfada, we had beer coozies made for the Manganari excursion, and we hand-made everyone’s place cards on the flight over – they were origami fortune tellers with ice breakers on the inside. These ideas all came from talking with friends and family and thinking about what people would really like and use.” 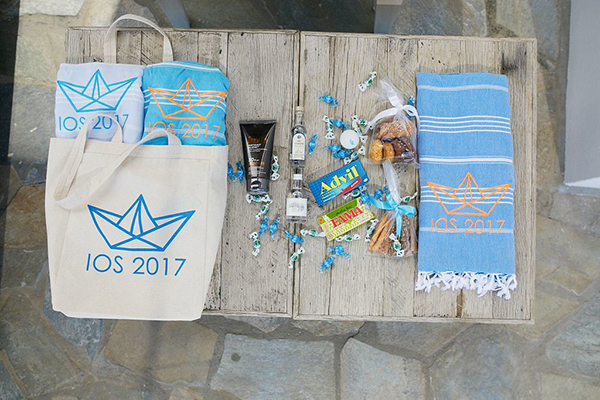 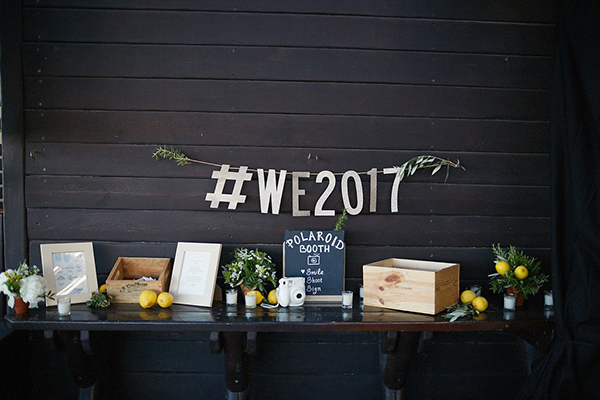 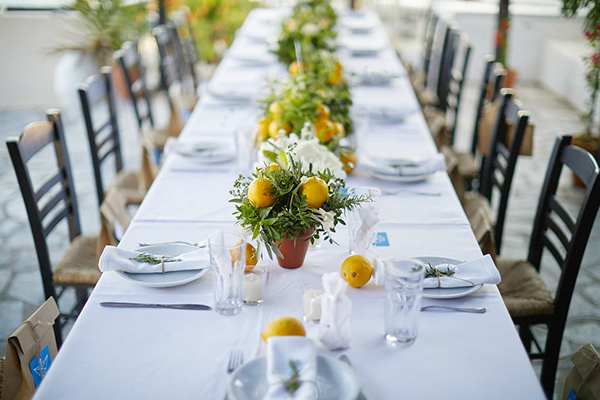 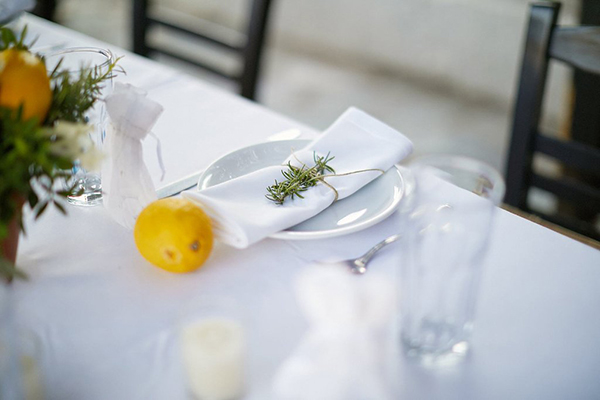 “It’s impossible to pick just one favorite moment. In general, I think it was how much our guests truly loved Ios. They’re already planning their own trips back – it’s wonderful to have shared this special place with the people that matter most to us.” 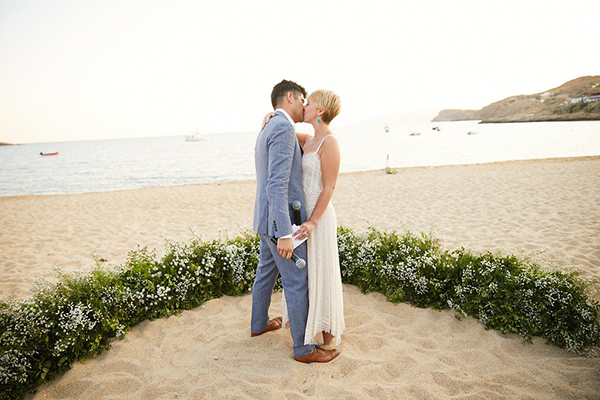 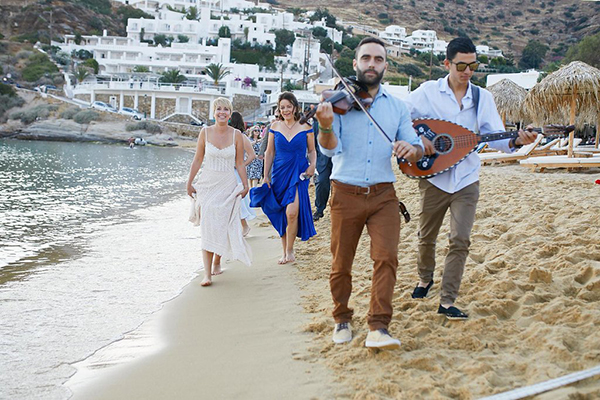 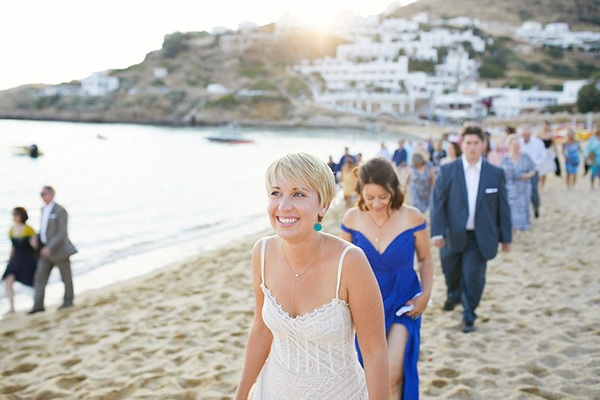 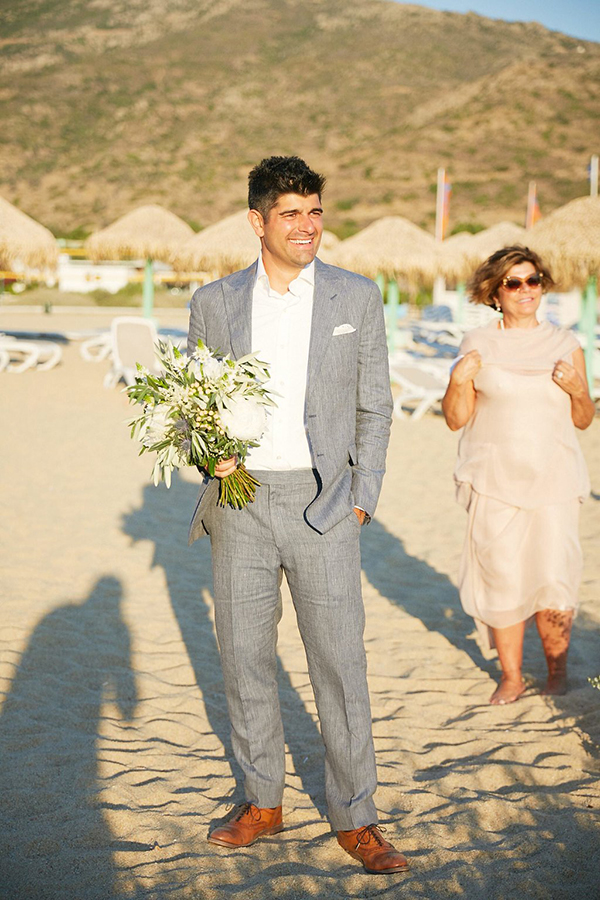 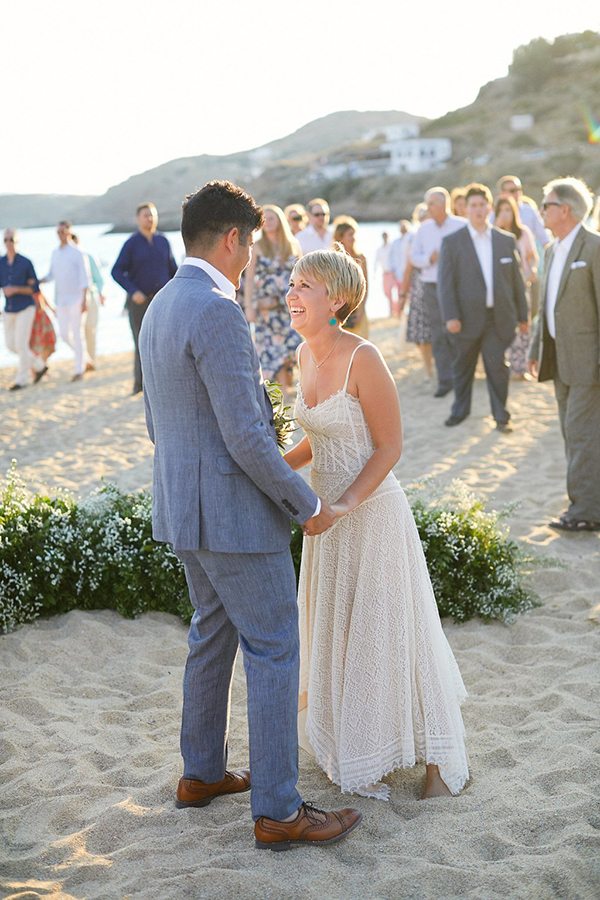 “I bought my dress off the rack at Neiman Marcus in Beverly Hills. It’s not a “wedding dress”, but it was perfect for me. It’s from Alexander McQueen’s  Ready-to-Wear Runway Collection”. 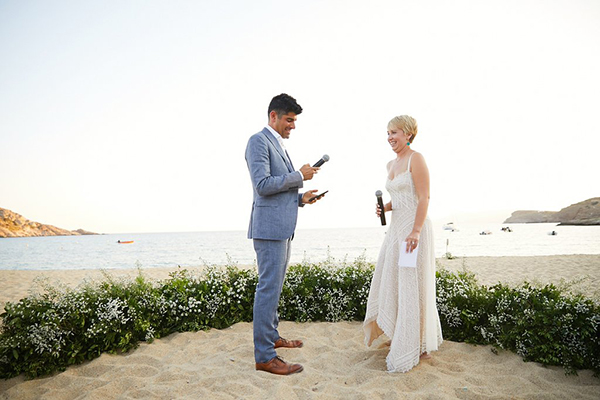 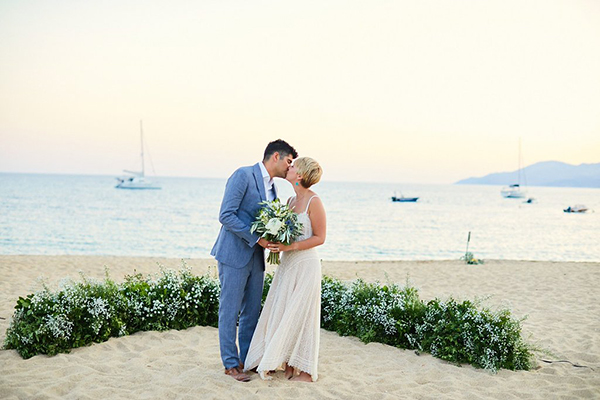 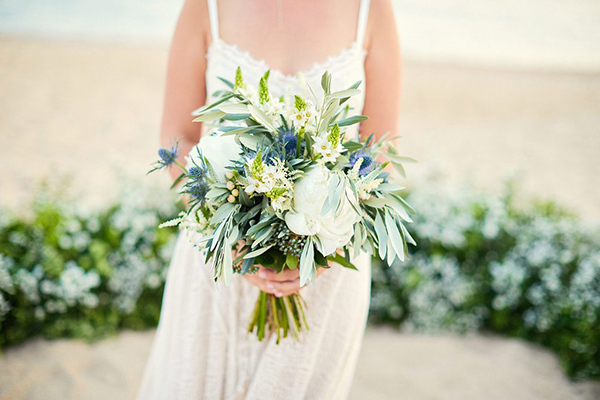 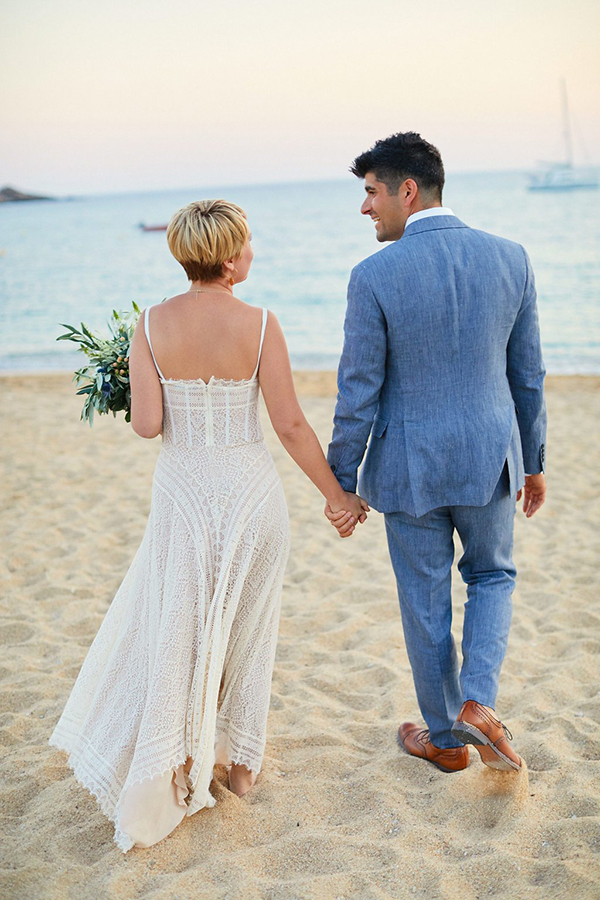 The bride’s advice: “Figure out what matters to you. I think there’s lots of advice out there that is intended to be one-size-fits-all. Every couple, family, and event is different. So figure out what pieces you care most about, and communicate that to your team. Do you really truly care about the flowers? Great! But if you don’t, it’s fine to hand that off to someone else to manage. Is this moment important to you because it’s your fairy tale? Then by all means, make it about you and your story. Have you been together forever and this is really only making it official? It’s fine to just have a nice dinner party. I was lucky in this, but everyone who was helping me understood that some things mattered to me and some things didn’t. I wanted the flowers to be lovely, but I didn’t want to pick them. I was more focused on arranging activities and travel for all of our guests. So for me, the most important decision was probably getting a wedding planner – Anna from The Event Company handled the details that I didn’t have strong feelings about. This was especially helpful because we planned the whole thing remotely – we had been to Ios before and knew that we wanted Harmony for the reception, but we couldn’t come out in advance to pick the Manganari bus. Anna handled that and a million other things for us…” 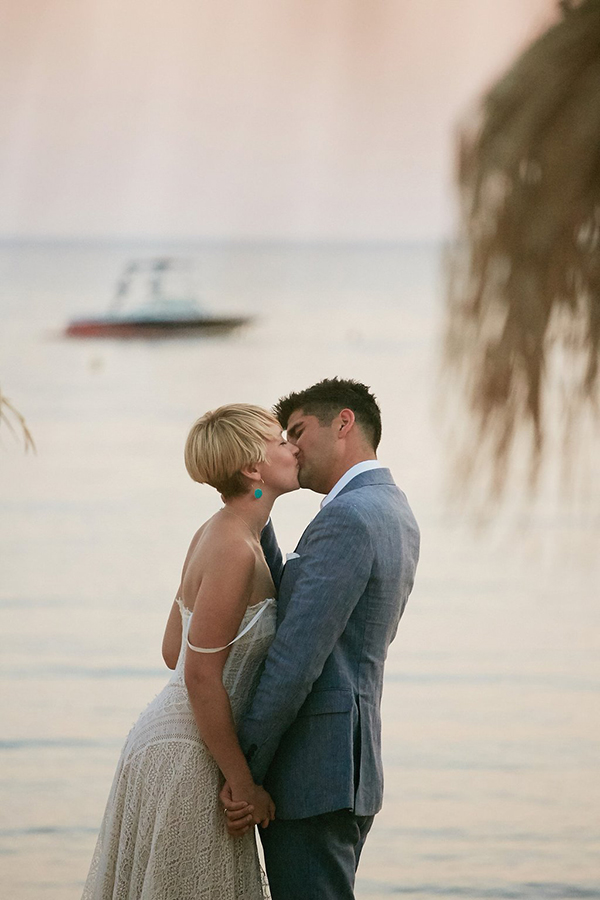