The wedding we are featuring today has mesmerized us! The beautiful island of Spetses was the perfect location for the lovely wedding of Sian and Georgios, who fell in love with the beautiful architecture of Poseidonion Grand Hotel and decided to have their wedding reception there. The decoration was elegant and romantic with beautiful flower arrangements in pastel hues, glass vases and candles! Have a look at the following photos and be smitten! 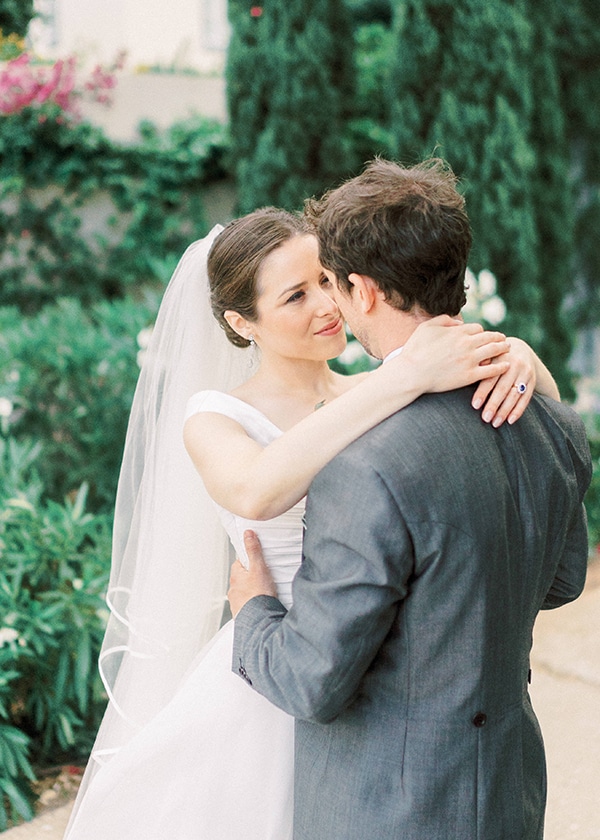 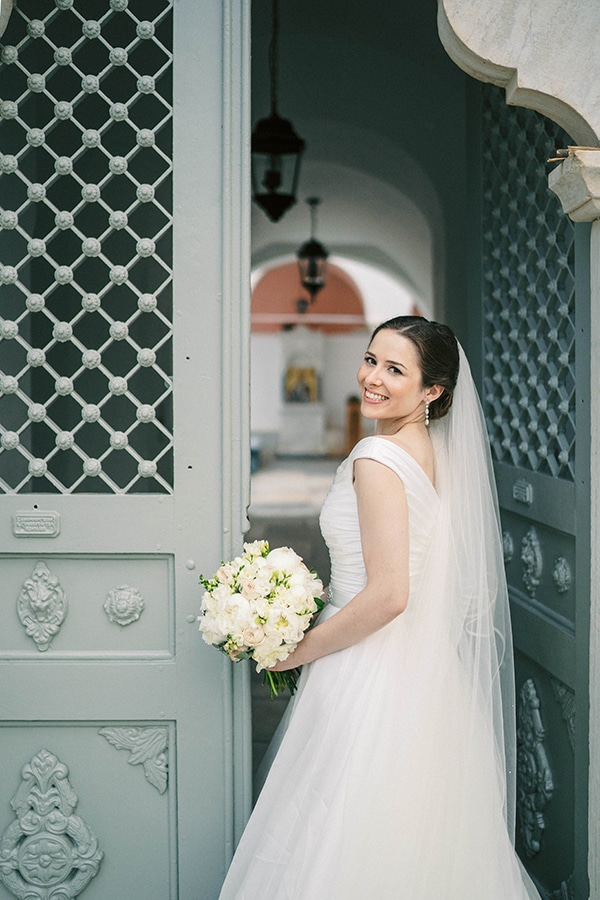 The bride shared with us: “We met in Leicester where George was a respiratory specialist doctor and I was respiratory research scientist at the University of Leicester undertaking my PhD research in cystic fibrosis”. 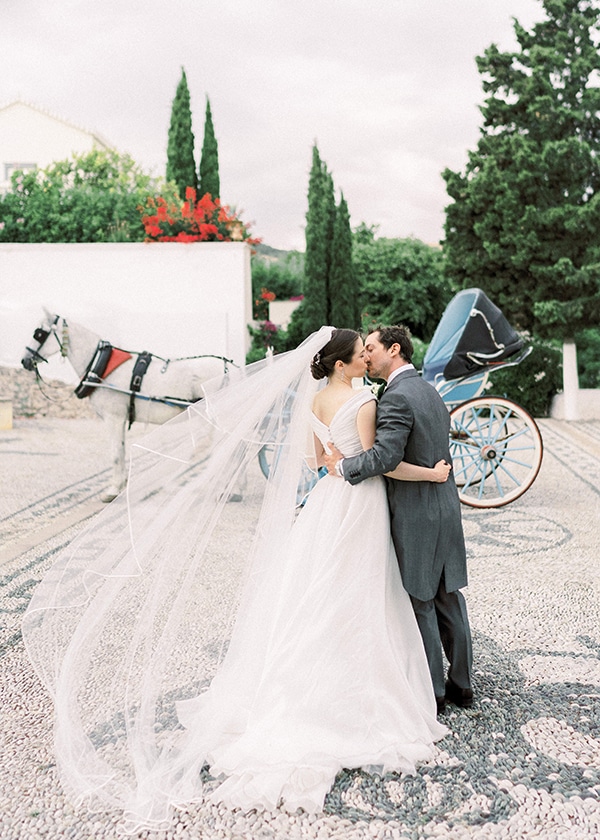 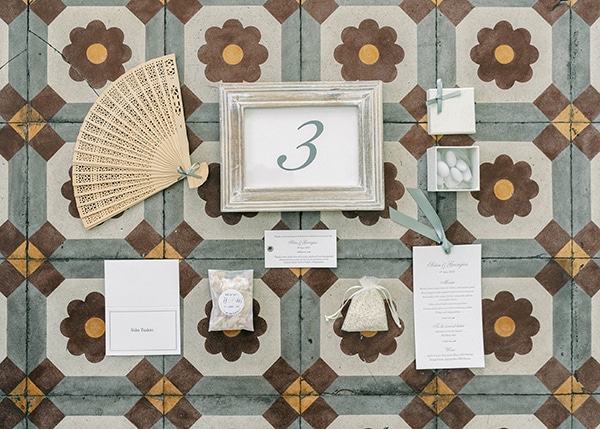 “George proposed during a weekend stay at Champneys Springs Health Spa in the Leicestershire countryside. He booked me in for several treatments so at first, I thought he just wanted to get rid of me! But, after being thoroughly pampered, he met me in the treatment waiting area and we went back to our room where he presented me with a photobook, telling a story of our time together. The last page had that all-important question: “Will you marry me?”, at which point he got down on one knee and presented me with a stunning sapphire and diamond ring in an olive wood box. We celebrated with champagne and a romantic dinner that evening at the resort”. 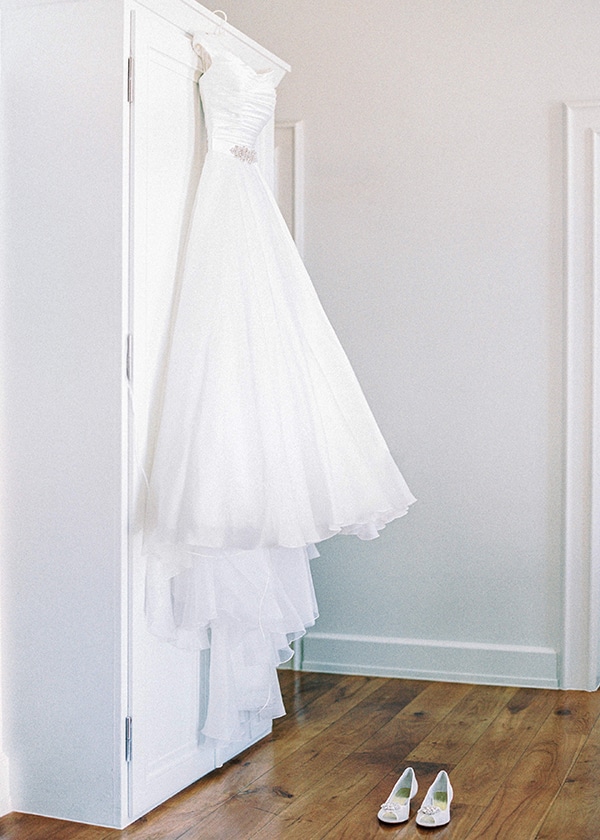 “I got my wedding dress from the Suzanne Neville Knightsbridge flagship store in London. My dress was a couture, silk ‘Savoy’ design and as part of the process a toile was initially made, and the pattern fitted by Suzanne herself to get the most perfect fit. I loved the scooped neckline of the design, the satin ruched bodice, the buttons, and the fullness and movement of the organza skirt. The dress also had some pearl and crystal detailing on the belt to match my Freya Rose shoes and to compliment the earrings gifted by my parents for the wedding day. My mother had arranged for a blue ribbon bow which had been sewn into her wedding dress by her mother, cut out and sewn into the lining of my wedding dress for my ‘Something old’. 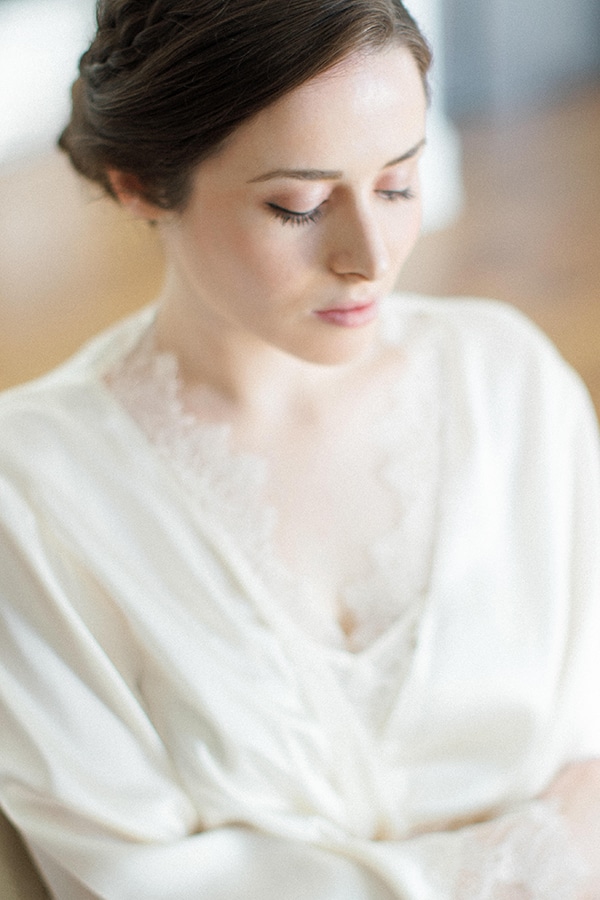 “I had always imagined getting married in a stately home in the UK and Burghley House in Stamford, England, near where I grew up was always a favourite of mine. I had never imagined having a destination wedding, but when I met George and we became engaged, we realised that his grandmother would not be able to attend the wedding if we did not have it in Greece”. 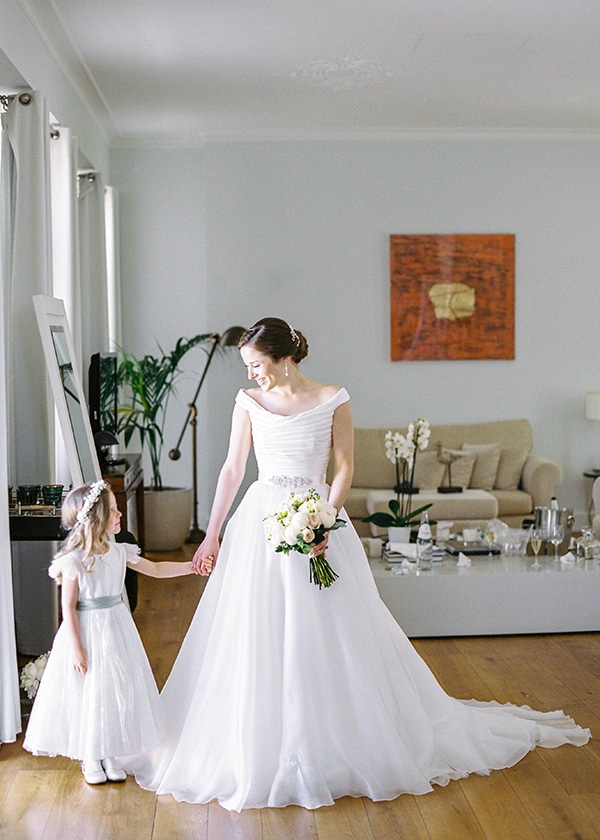 “My flower bouquet had peonies, roses, freesias, hydrangeas, lisianthus, eucalyptus, and other greenery”. 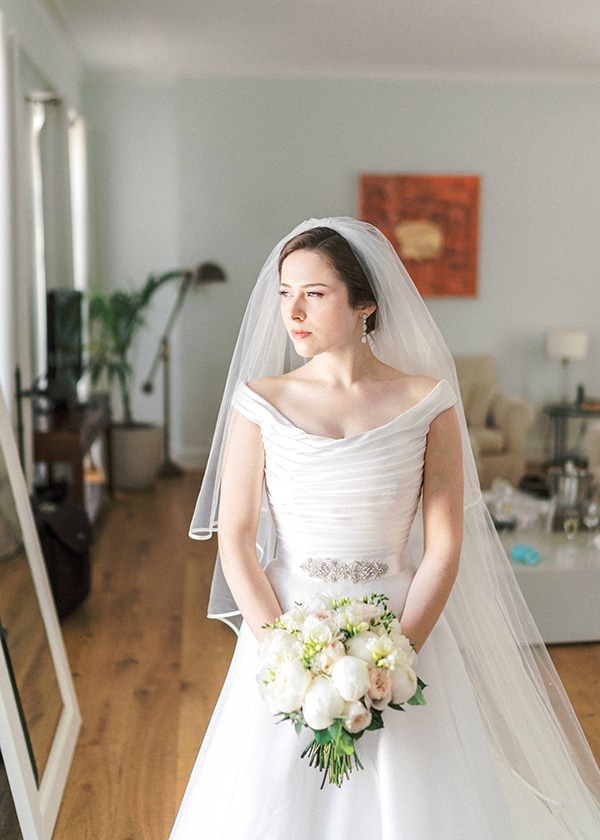 “When I was younger, I used to regularly horse ride and I used to keep horses. I loved the idea of having a horse and carriage for our wedding day. When we arrived, we had noticed Agios Nikolaos and decided to investigate. I adored this church and after further research learnt about the history of Spetses and its cultural significance. It was perfect”. 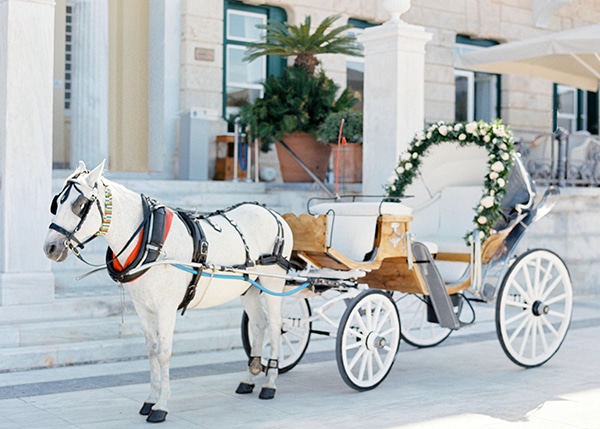 “The ceremony took place in Agios Nikolaos in Spetses island, Greece and our wedding reception was held at the Poseidonion Grand Hotel”. 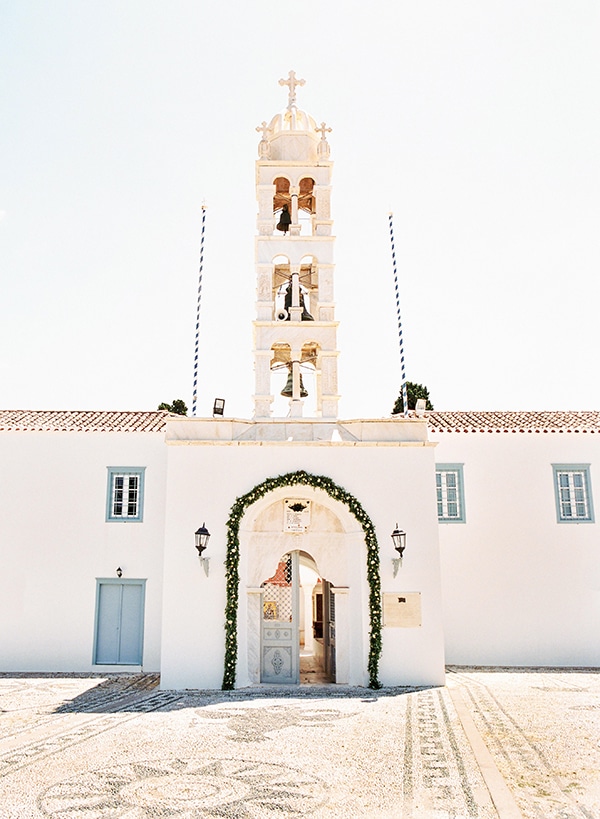 “I’m not sure how to describe our wedding exactly but we knew we wanted something elegant, romantic, and timeless. I chose white, soft pinks, greens, silver, and wooden accents”. 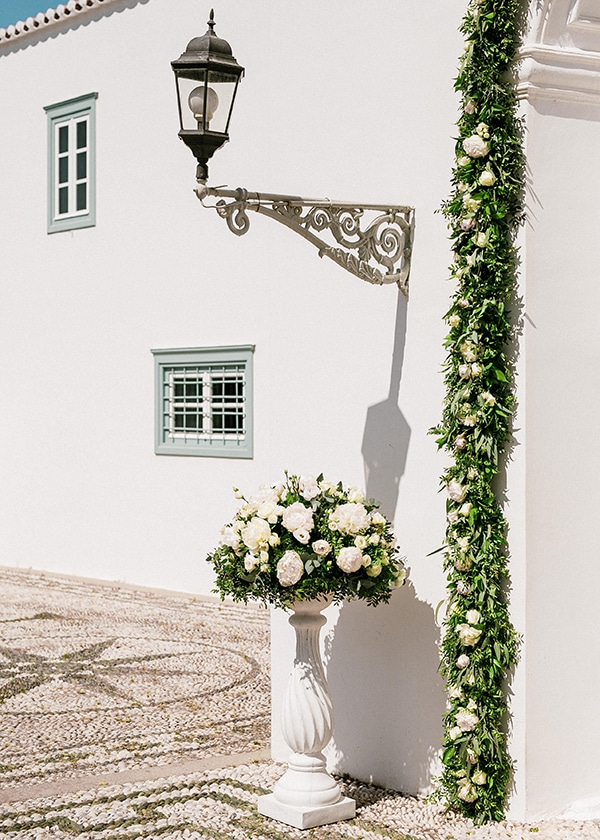 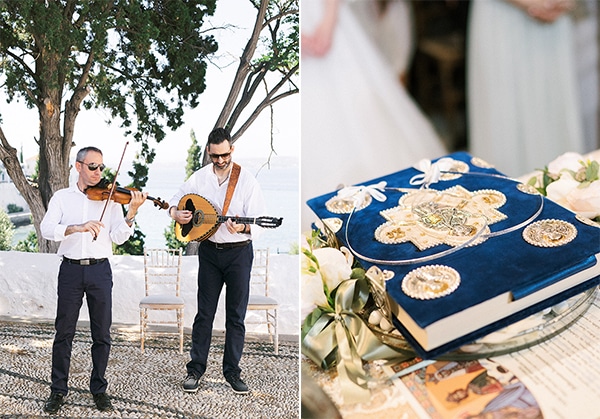 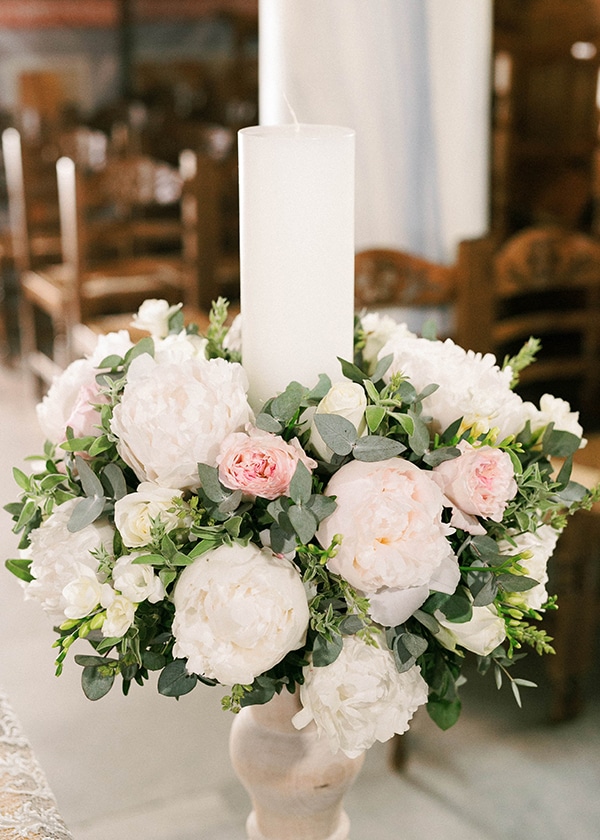 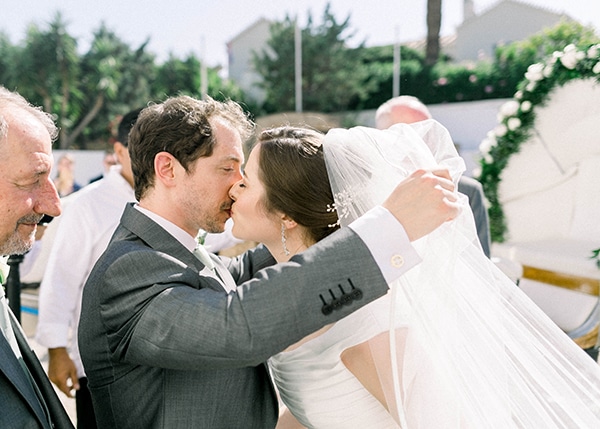 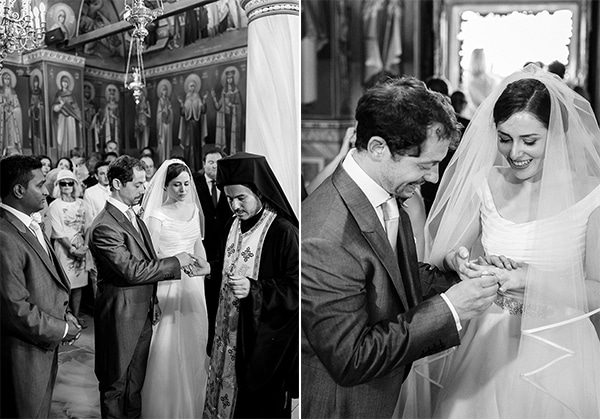 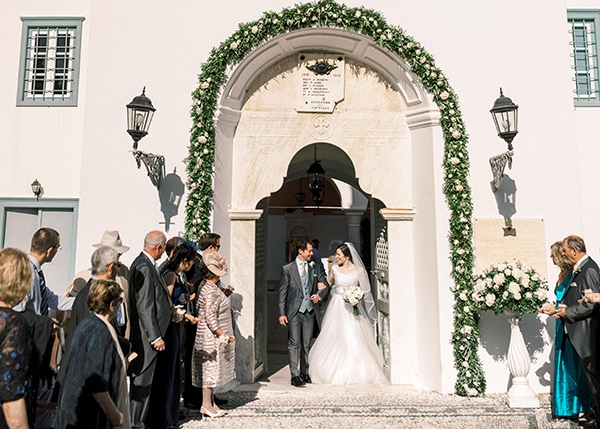 “The best moment of your wedding was the carriage ride immediately after the ceremony on our way back to the Poseidonion. It was a moment of calm – just for us”. 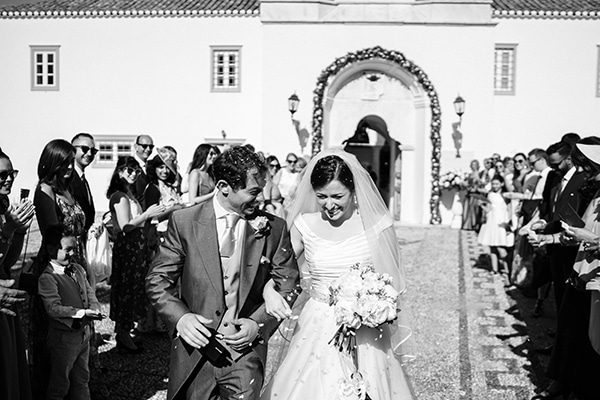 “However, I didn’t want to completely sacrifice my stately home wedding idea and a beach wedding was not really our style. After some thorough research, we came across the Poseidonion Grand Hotel in Spetses. It was the hotel that initially captured our attention with the beautiful architecture and prominence on the island as you arrive by boat. The location was fabulous! We quickly booked a visit and not only fell in love with the hotel, but the whole island including the people, the food, and the sea.” 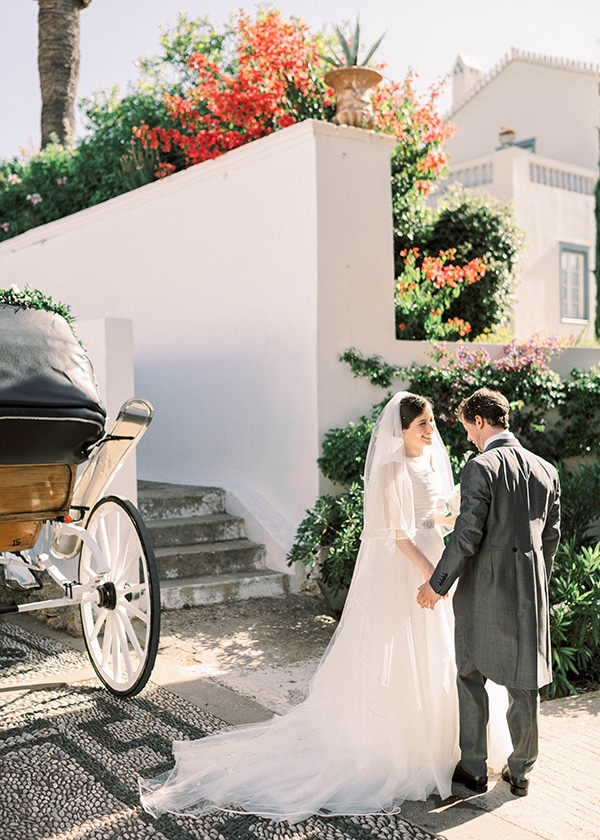 “In the evening, I wore a tea length, ivory, lace off-the-shoulder dress by Kelsey Rose for dancing. I wore this with a beaded ‘Ivory and Co’ belt loaned to me by my sister-in-law as my ‘Something borrowed’”. 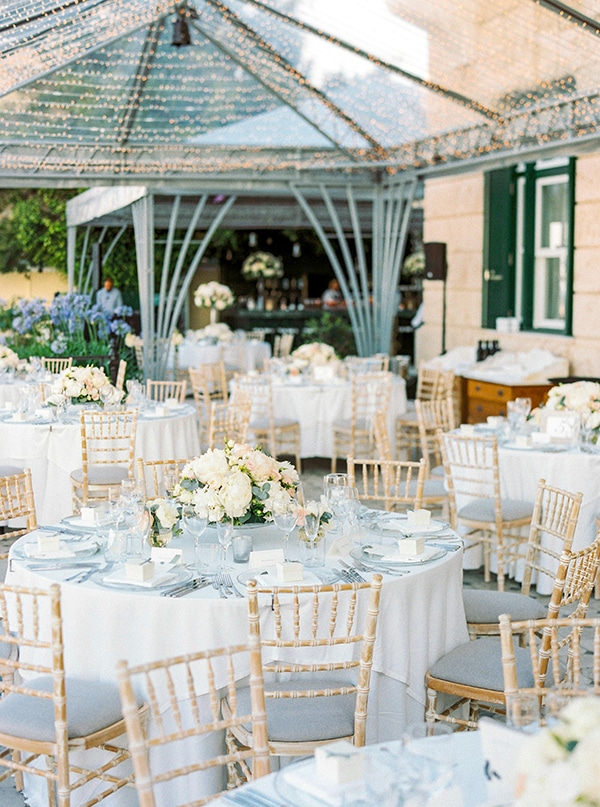 “The veranda at the Poseidonion doesn’t really need much decoration because you have the view of the sea and the venue itself is so beautiful. However, we decided on clear tents (in case there was a little rain) with fairy lights to decorate the clear ceiling so that at night, it wouldn’t feel like you were under cover”. 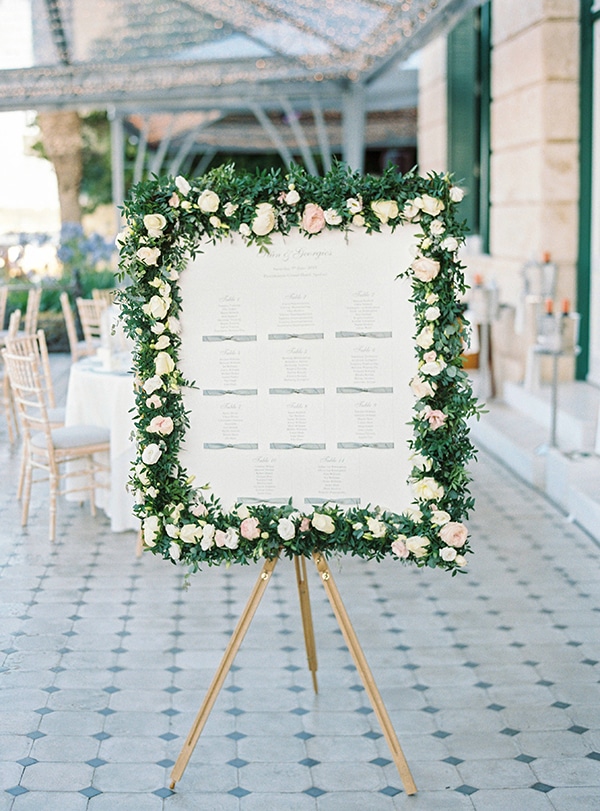 “We had flowers on the bar and on the bar tables. The top table had a tall flower centerpiece surrounded by smaller vases of flowers and in between silver, mirrored candles. The flower arrangements on the other tables were lower with three smaller vases surrounding the main centerpieces with candles. We also had flowers on the ‘Mr’ and ‘Mrs’ chairs with the signs hanging off and more candles scattered around the venue. The table plan had ribbon to match the invitations and was surrounded by a flower garland”. 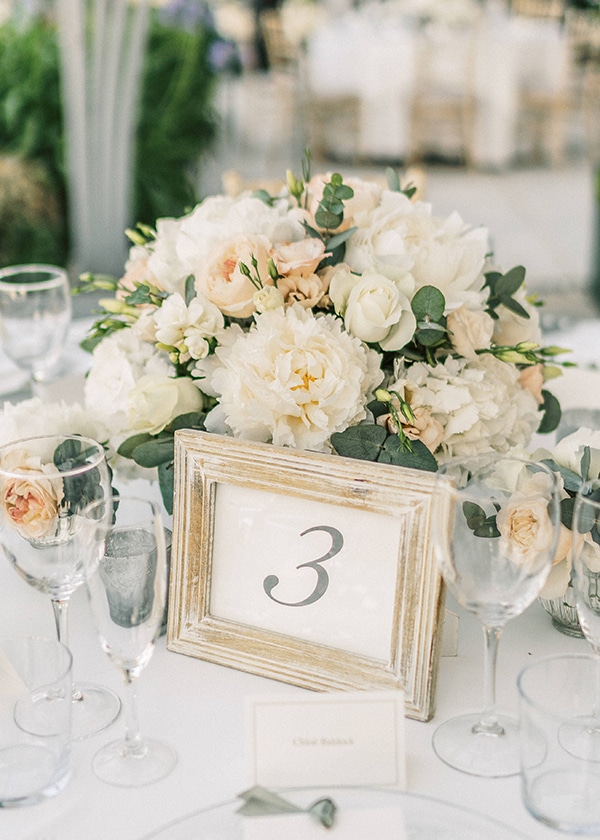 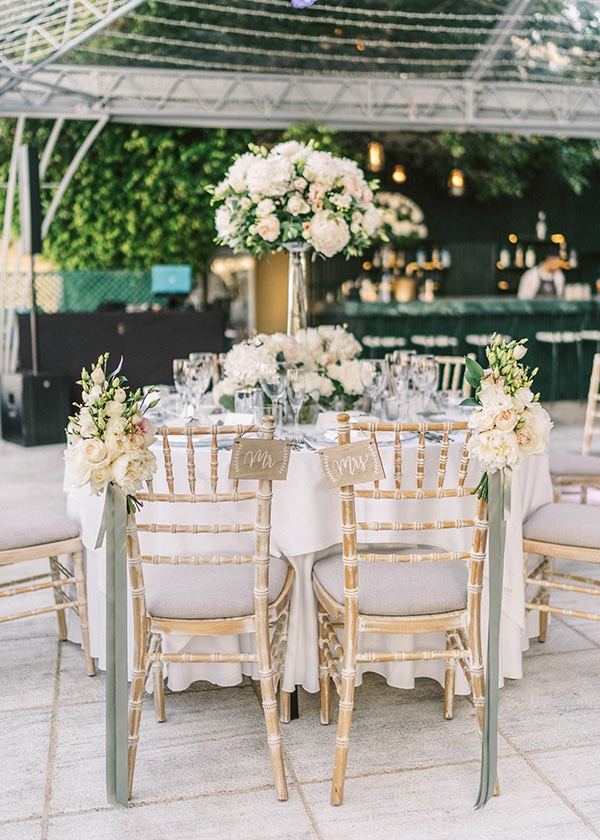 For the tables, Stella and Moscha sourced some wooden photo frames from Zara Home for the table numbers to match the Poseidonion’s wooden Tiffany chairs. To tone with these, the wedding favours provided by George’s parents had olive oil, gin, and honey placed on a wooden stand, wrapped in light ivory organza, and tied with the same ribbon and stationery as the wedding invitations, menus, and almond boxes. These favours were originally meant to be on the tables themselves but unfortunately there wasn’t enough room. Instead, we had sugar-coated chocolate almonds in boxes to match the menus. These boxes had a green bow tied in the same ribbon as used for the menus, invitations, and table plan. For the linen, we kept to simple white and silver cutlery to match the candles and to keep everything clean and crisp so that the flowers were the focus. However, when presented with the idea of charger plates, I couldn’t resist! These were chosen to match the glass vases holding the flowers”. 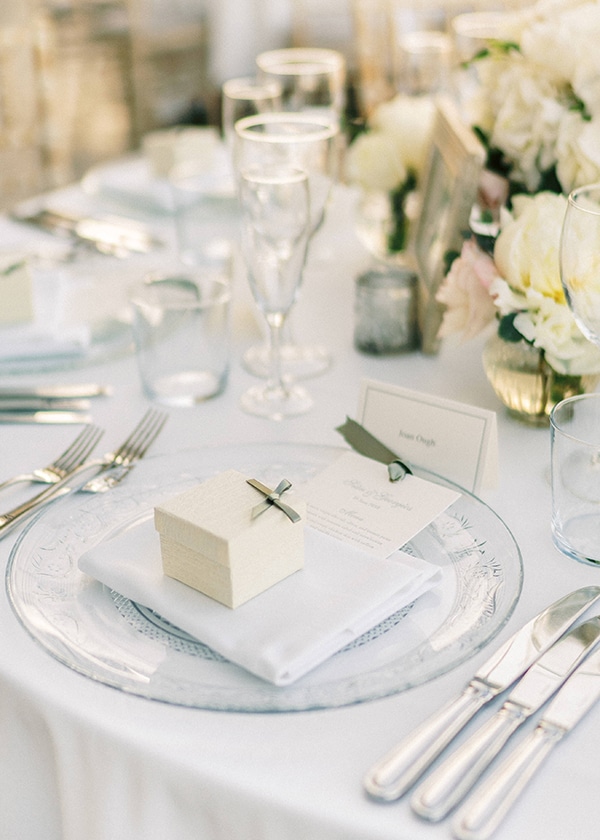 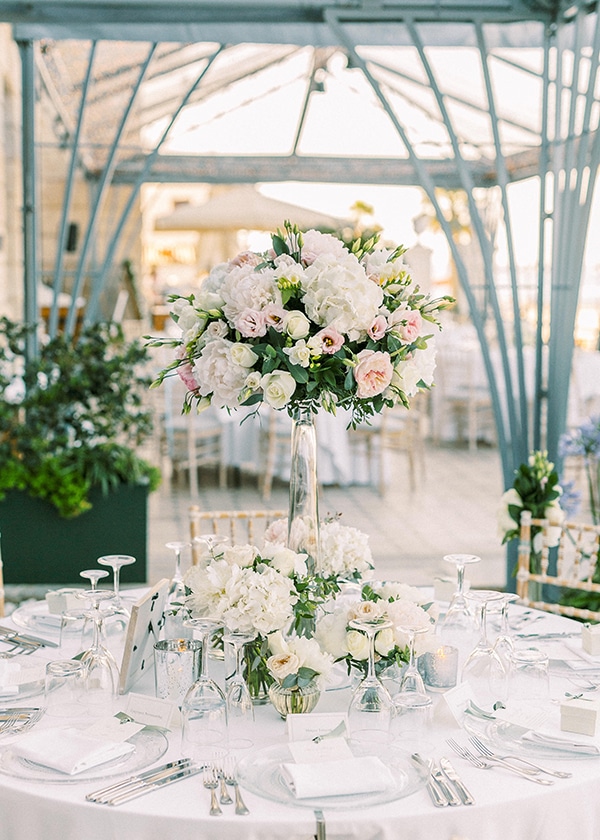 “I used Pinterest and bridal magazines as a starting point and then extensive google searches led me to blogs where I was able to fine-tune what I was looking for”. 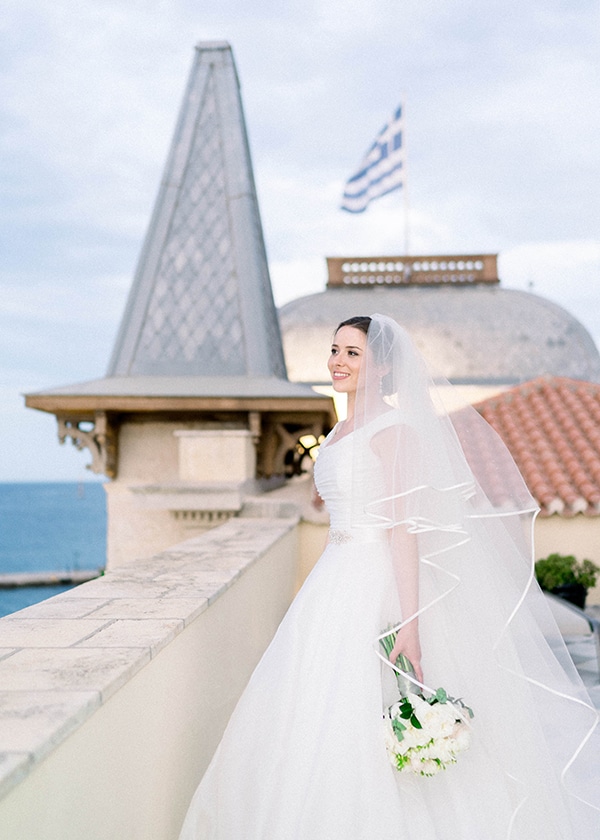 Bride’s advice: “Brides put so much emphasis on having a truly perfect day which adds more pressure to an already pressurised situation. It’s extremely rare to have a perfect day in the truest sense of the word in everyday life, so why hold your wedding day and yourself to this impossible standard?! It isn’t fair. It’s not about being pessimistic, it’s about being realistic and managing your expectations. Of course, our wedding day was as perfect as we could have hoped for, but with heightened emotions and expectations, combined with the number of guests and possibilities of what could go wrong, it’s simply impossible to predict every eventuality – trust me, I tried! There is always something that won’t go according to plan or not how you imagined. It may be as small as a shoe clip falling off or the sun being too bright (YES – I was worried about it raining in Greece! Call it British paranoia; Britain is after all a very wet island!). So, my advice would be to let go of the small stuff and not worry about what is out of your control; enjoy the process and the moment you’re in on the day because those are what make those beautiful memories. Also, invest in an incredible make-up artist and cooling eye patches. Together, they will be your best friend if you only have two hours of sleep!” 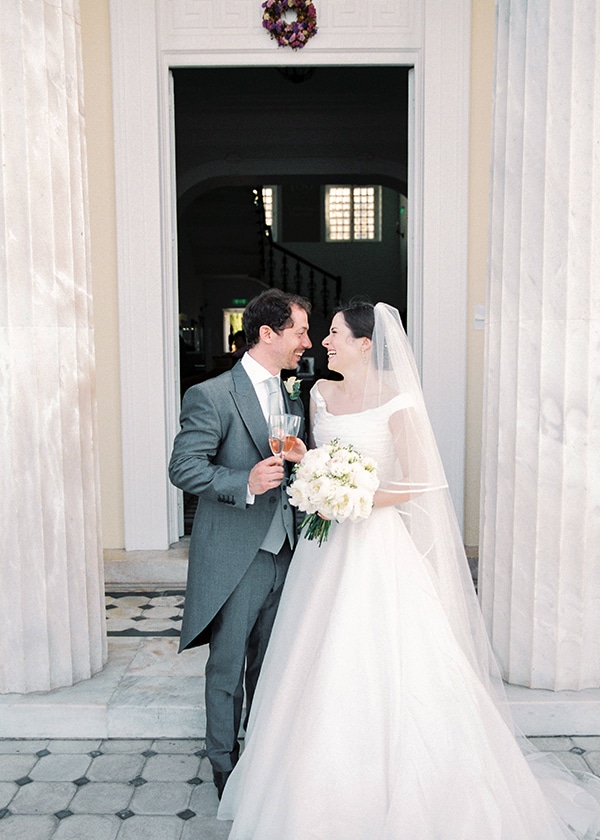