Chris and Nathan exchanged their vows at a dreamy location in Pelion with some of their dearest friends and family! With a beachside chic theme and beautiful decoration in white, blue, pink and purple tones by floral designer Ioulietta Mitsopoulou from Comme Ca, their destination wedding in Greece was so beautiful! Both the ceremony and reception were held on the beach, having the sea as the backdrop, which was incredibly romantic! Have a look at their wedding day and you will be smitten! Captured beautifully by KonstantinosArt 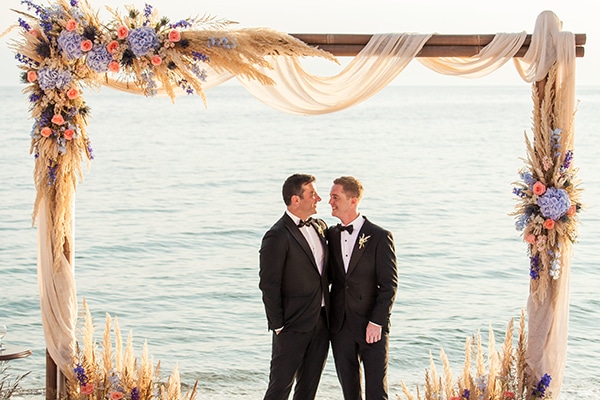 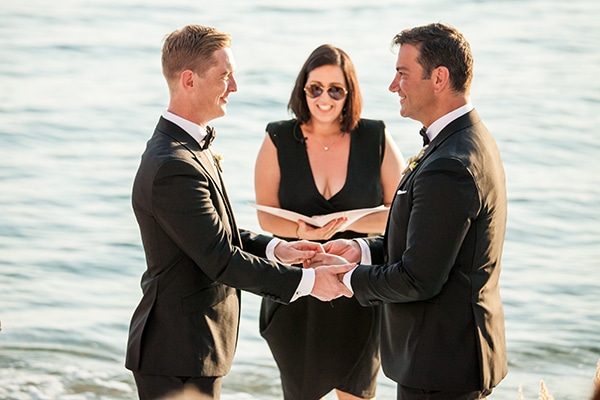 From Ioulietta Mitsopoulou, from Comme Ca: “Just six months before their wedding, Chris and Nathan decided to work with me! They had decided not to have a wedding planner, so everything had to be done from the beginning and many things they have already chosen had to be combined in the best possible way with the decoration! We only communicated though emails and some calls and the time difference with Australia was big!” 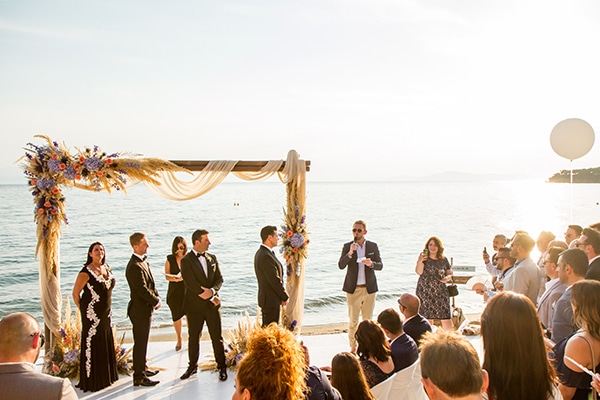 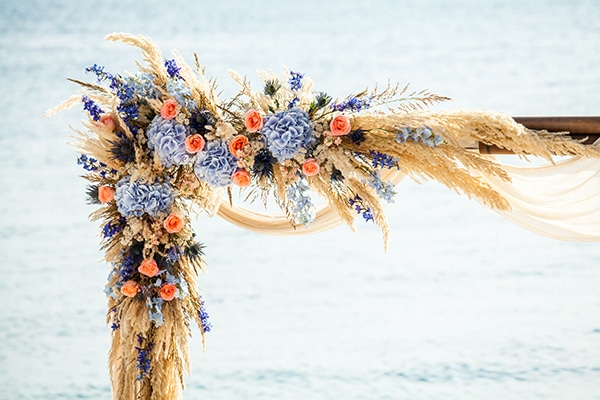 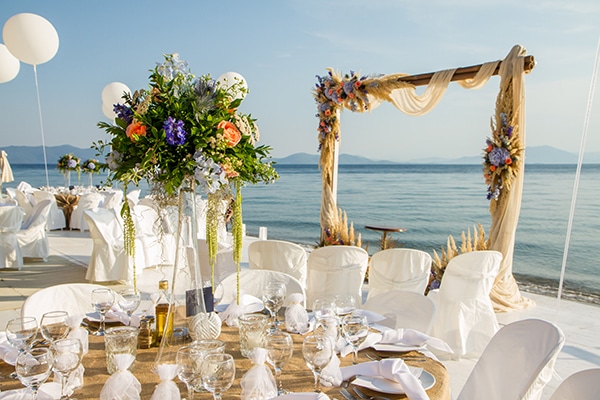 “Their initial desire was to use various shades of green combined with white – a classic choice! Before I suggested anything, I wanted to see the couple, even in social media! Without being the safest way to make a conclusion of their personalities, it was necessary to decide what will fit them better – I saw two bright, kind and elegant men. After that, and in combination with our sea and sky, the choice was an easy one! They trusted me without any hesitation and we combined hydrangeas with roses, delphiniums, eryngiums, violets and amaranth!” 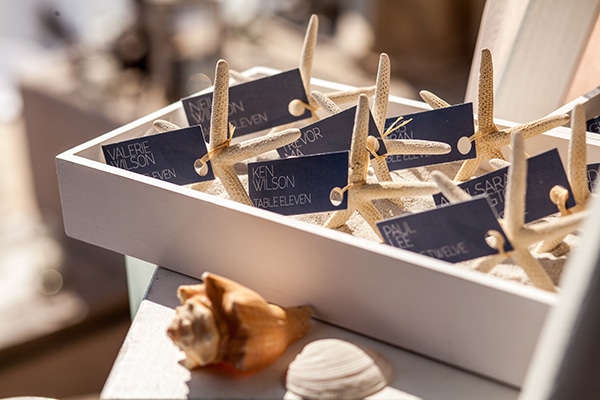 “They arrived in Greece a few days before their wedding and my initial impression of them was right! After their wedding day, I was lucky to get to know them better. They expressed their ‘thank you’ with a hug and I was moved by their action! Chris and Nathan are one of the loveliest couples I have met in fifteen years of creation!” 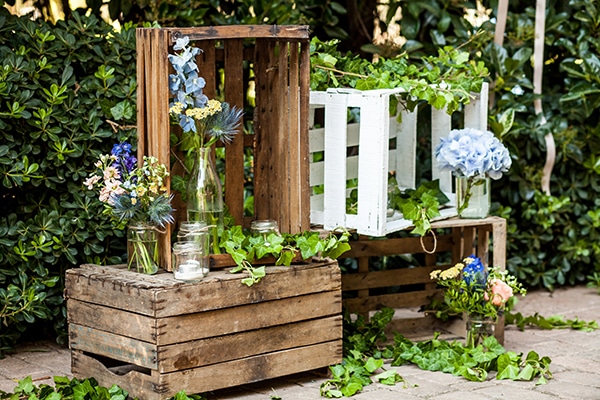 “We met through mutual friends in Sydney, Australia and 4 years later Nathan proposed during our annual Greek holiday. He hired a helicopter to fly over Athens and proposed at sunset over the Acropolis during sunset”, the couple shared with us. 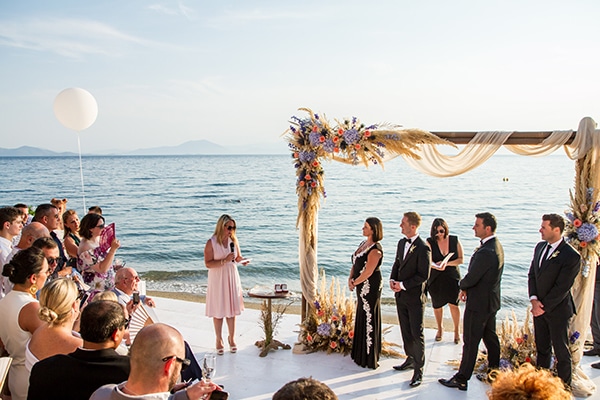 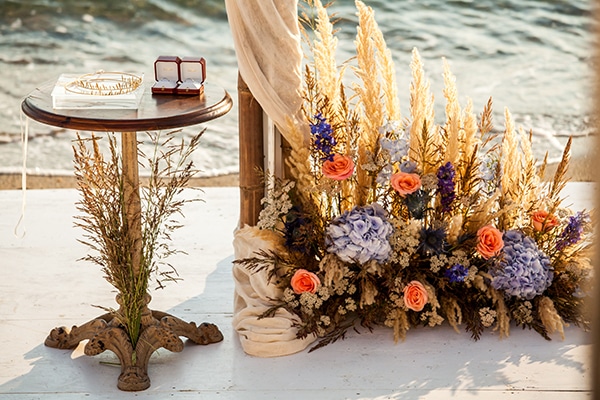 “The ceremony took place in Pelion, in a small village called Afissos with 120 of our dearest friends and family flying in from around the world gathered on the water’s edge. Los Angeles, Dubai, London, Sydney and all-around Europe. We hired a guest house called 6 Keys which we had fallen in love with years ago and transformed the venue into a magical space for the ceremony and the reception”. 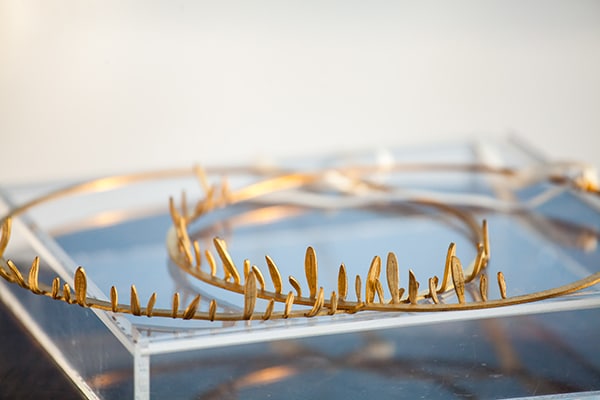 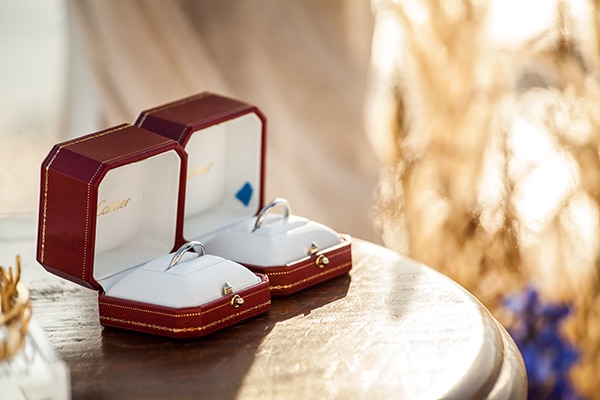 “Greece is very close to our hearts. Chris was born in Australia to Greek parents and has a connection to Greece. We visit every year. A few years ago, whilst travelling around the region of Pelion, we came across the 6 Keys guesthouse and have been visiting ever since. It is a magical place and has an energy that we cannot get enough of. Greece was the obvious choice for our destination wedding”. 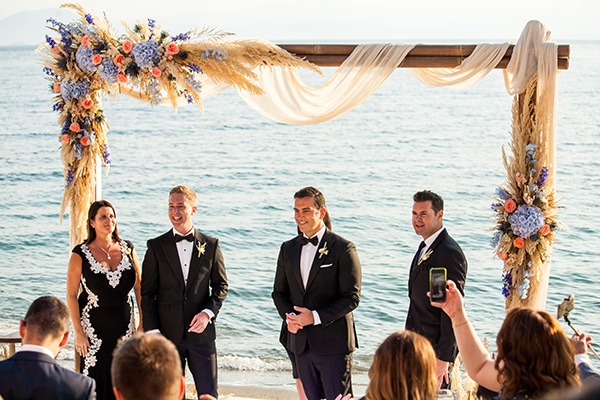 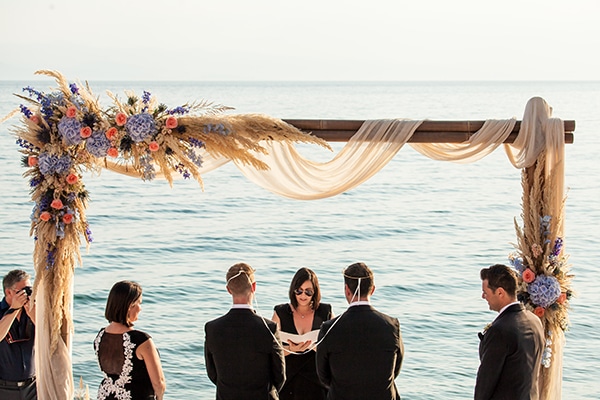 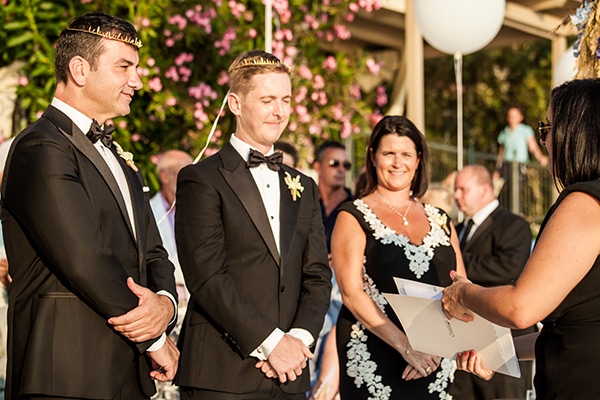 “The concept for the wedding was beachside chic and we wanted to work within the French provincial theme that the venue already had. Colors used where whites, blues, and pink and purples. We wanted a sea of color. The lighting designer also used these colors when he was designing the lighting for the event”. 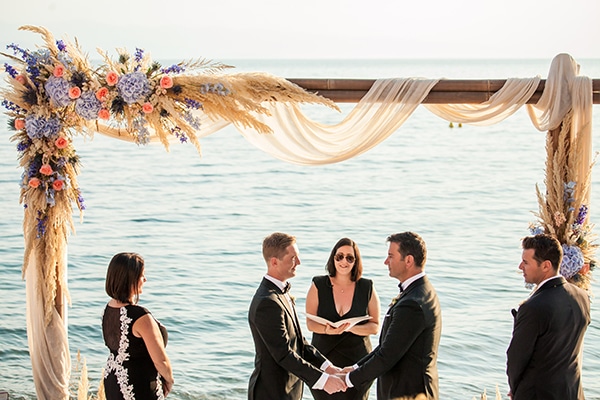 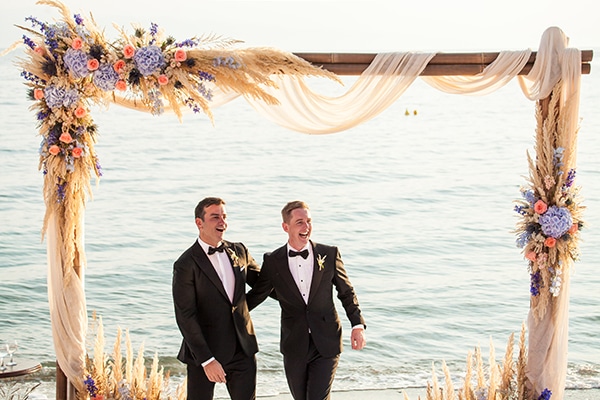 “Comme Ca was our decorator and Ioulietta was amazing! Being based in Sydney, Australia, there was a lot of emails, Skype meetings and telephone calls. We built a deck on the beach right up to the water which was the setting for both the ceremony and the reception and it was decorated beautifully”. 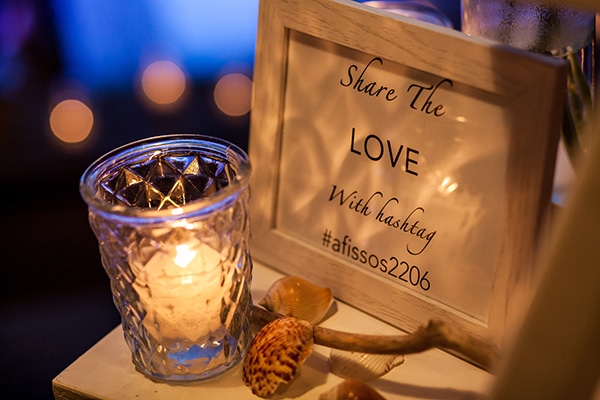 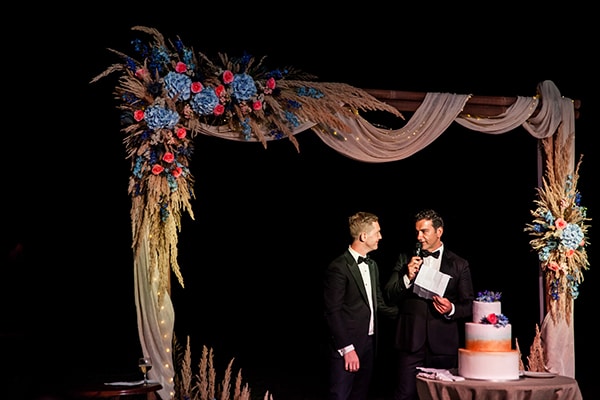 “We found inspiration from Chic & Stylish Weddings actually! We also used Pinterest to locate images, so that we could send to the venue and the decorator”. 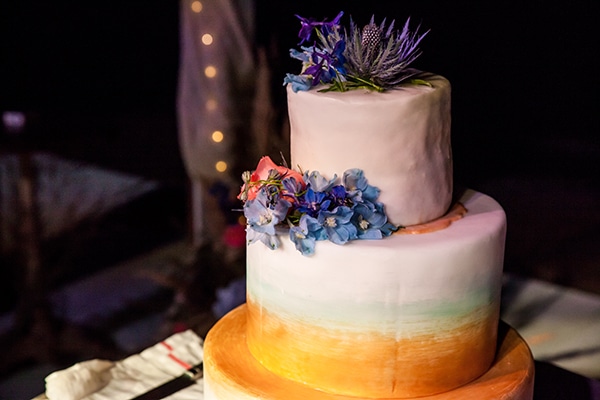 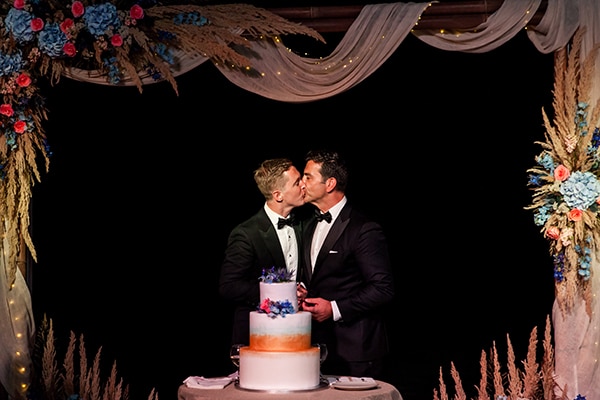 “Saying I do as the sun was setting in such a beautiful area and having all our family and friends travel to Greece to be a part of it was the best moment by far. All our guests fell in love with Greece and Pelion”. 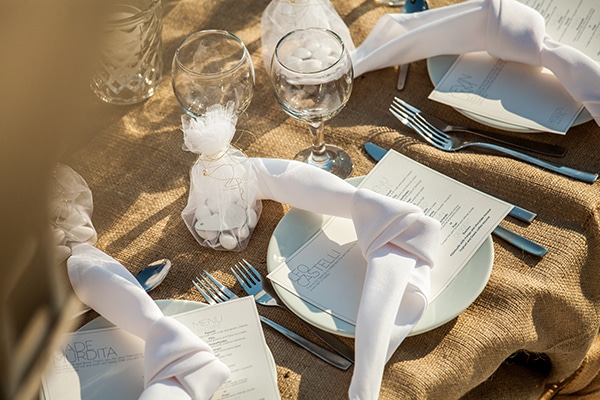