It is so obvious from every single photo that Sandy and Odysseas Photography shared with us, this couple truly enjoyed every moment of their romantic wedding in Andros, a place as the bride said she instantly fell head over heels in love with:“By the time Tom had proposed we both knew exactly where we wanted to get married, on the island of Andros, where his parents lived. Tom took me out there to meet his parents a few months before the proposal and I instantly fell in love with the Greek island. Tom and his parent’s had holidayed on the island for many years which then led to them moving out there 11 years ago and I completely understand why. The island is a stunning, colorful place, full of greenery inland and white sandy beaches by the coast. It is not one of the main tourist islands which made everything that much more real. It almost felt untouched and the local Greek’s were ever so friendly and welcoming…” 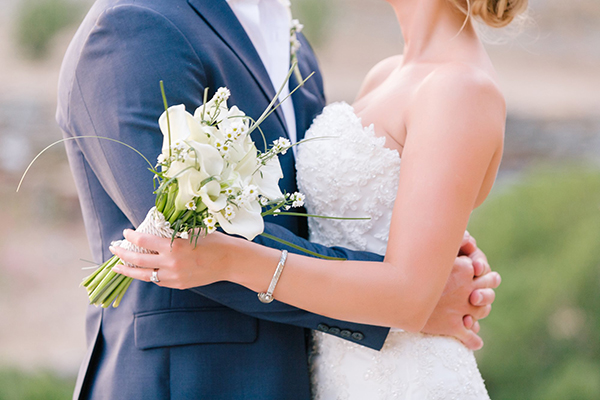 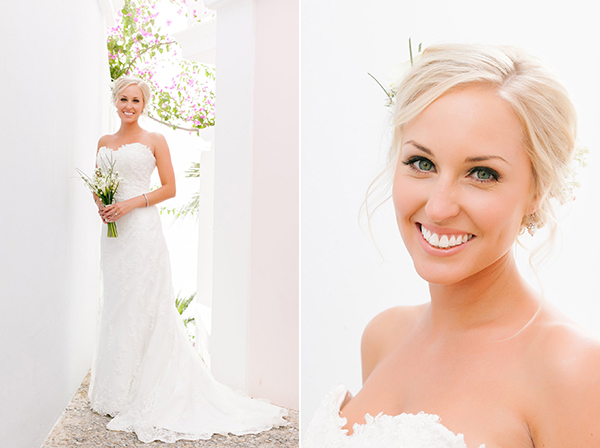 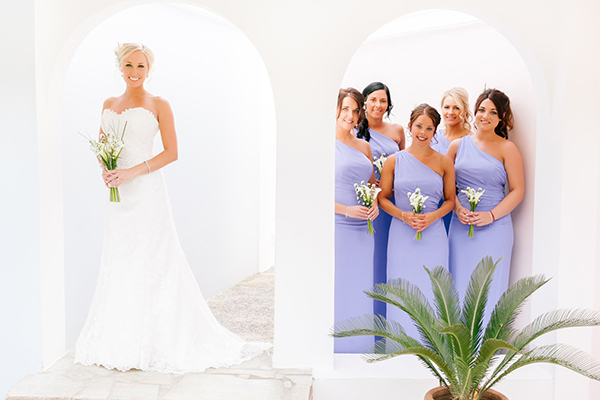 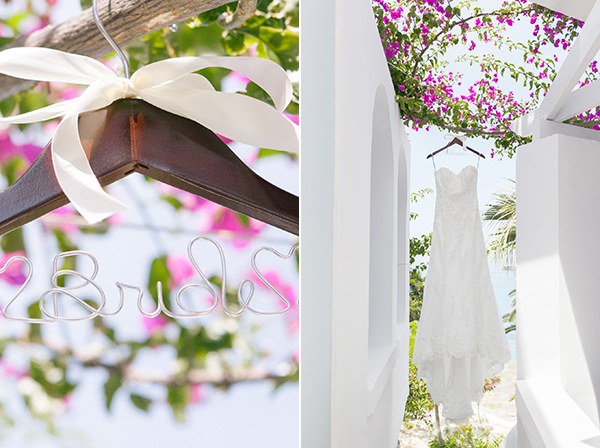 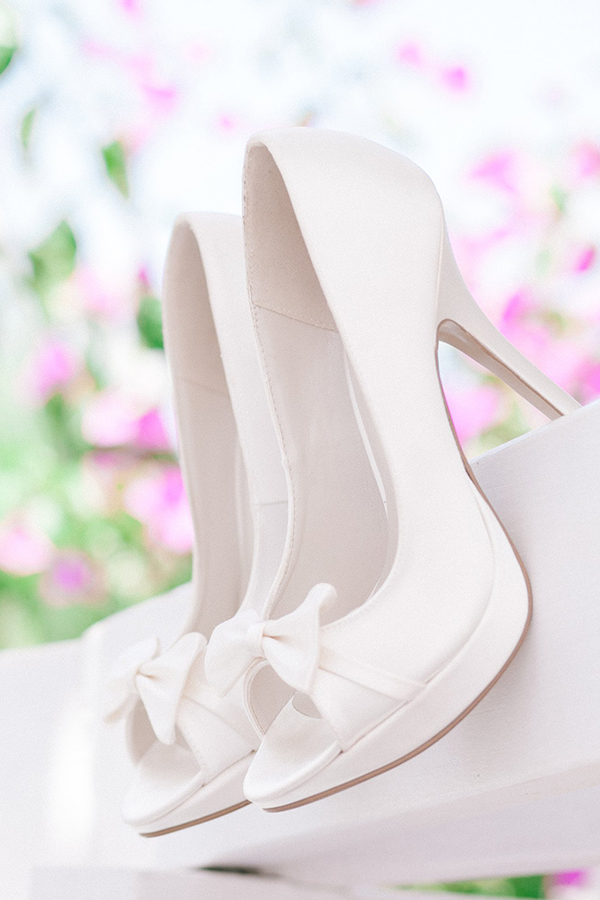 “One of the best moments of the day was simply getting ready with my bridesmaids. We spent the whole day (as we didn’t get married until 7pm) laughing and reminiscing. We got ready at Aneroussa Hotel which is just next door to Blue Bay and Maria (the manager) was excellent. She brought us pizza to eat and a Greek drink to help wash it down. When it was time for the ceremony we walked up to Blue Bay following two Greek musicians. This is a Greek tradition and it really set the whole ceremony up wonderfully. There were a few local Greek’s at the wedding who got everyone up Greek dancing after the ceremony which added a fun, traditional vibe to the reception”. 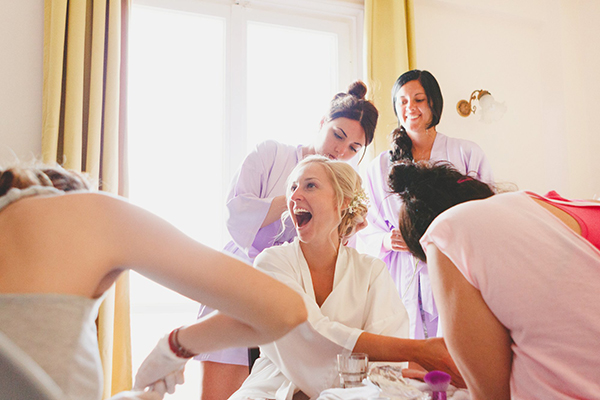 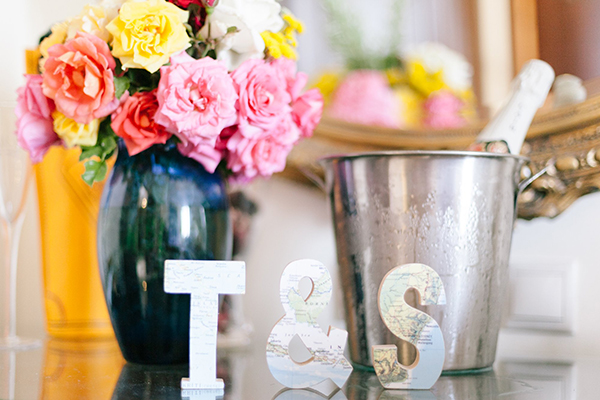 The bride shared with us: “Tom and I met back in 2011 when my best friend set us up. She had met him at her partner’s work function and instantly thought that we would hit it off. We eventually started messaging and agreed to go on a date. Two years later he decided to put a ring on it and asked me to marry him in a very romantic proposal, in front of a tree that he had carved our initials into. Of course I said yes!” 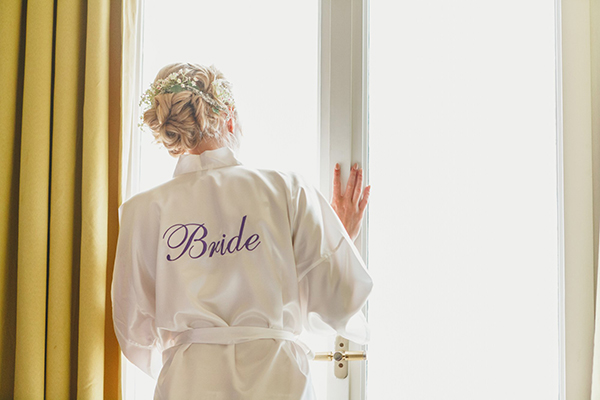 “One day whilst we were there on holiday, Tom’s parents took us to Blue Bay Holiday Village to meet George (the owner) and have a swim in the pool. Once we got there I instantly knew that was where we would get married, overlooking the Aegean Sea. I even told George this and said as soon as I had the ring on my finger we would book a date!” 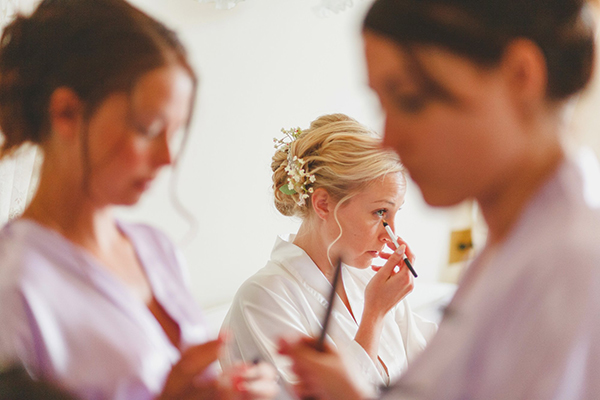 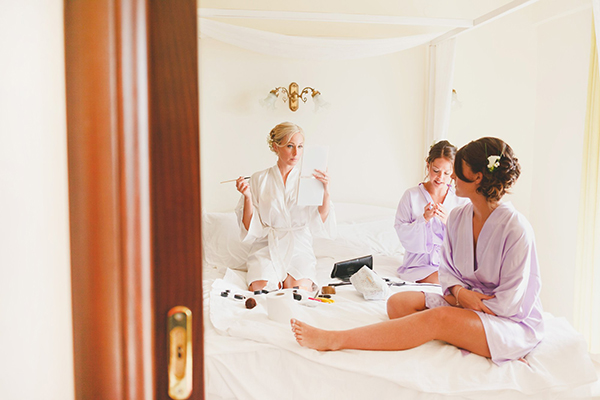 “During the engagement Tom and I were living in Vancouver, Canada which made wedding plans a little more difficult. Organizing a wedding in Greece, with all the wedding guests in England and the bride and groom in Canada proved quite stressful but one of the easiest decisions we made was finding our photographers. We looked at many portfolios online, including English photographers with the intention of flying them out there, however no photos took our eye like Sandy and Odysseas Photography. I had never seen wedding photos as beautiful as this and knew instantly that I wanted Sandy and Odysseas to be there to share our special day with us. We set up a Skype call and had a quick chat and without hesitation booked Sandy and Odysseas Photography for the wedding”. 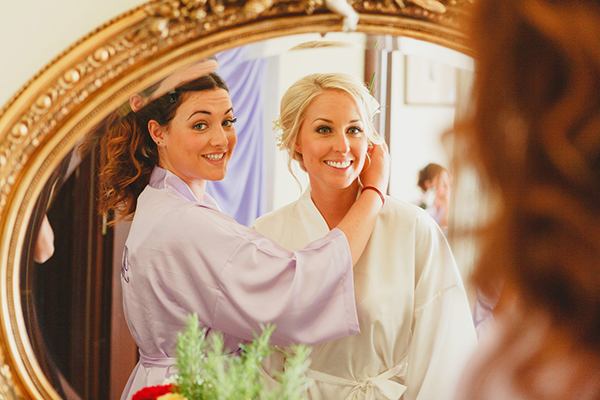 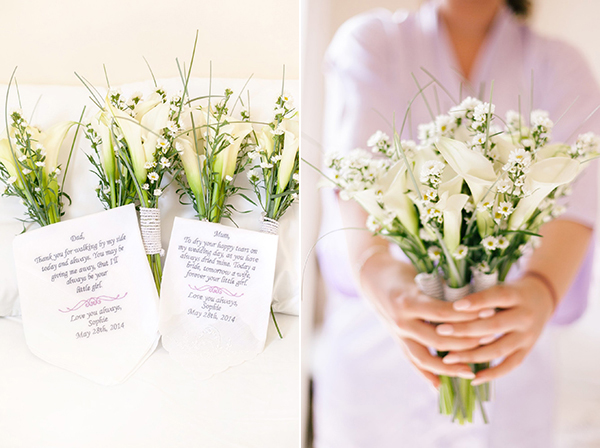 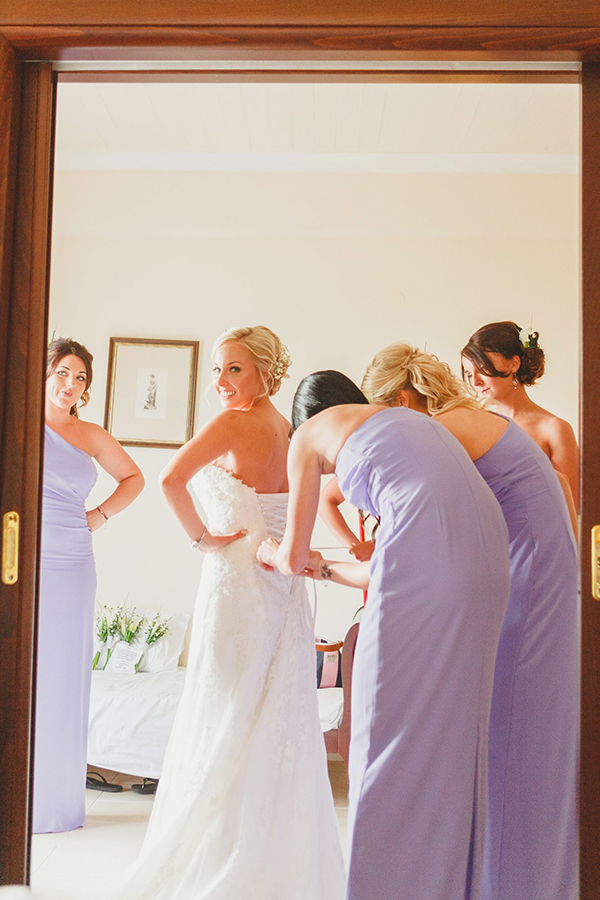 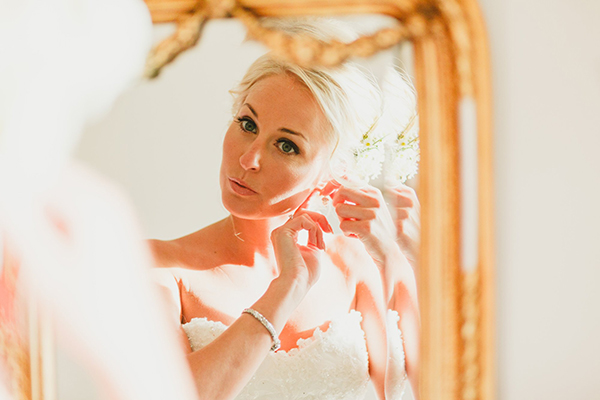 “When they arrived in Andros on our wedding day they started taking pictures from the moment they got to the hotel. They were extremely professional but more importantly so very friendly. I felt like we had made friends for life by the end of the day. Once the wedding day was over, the excitement carried on with the anticipation of receiving our photos, and boy did they deliver! They are by far the best wedding pictures I have seen and we have had many comments on them by friends all over the world”. 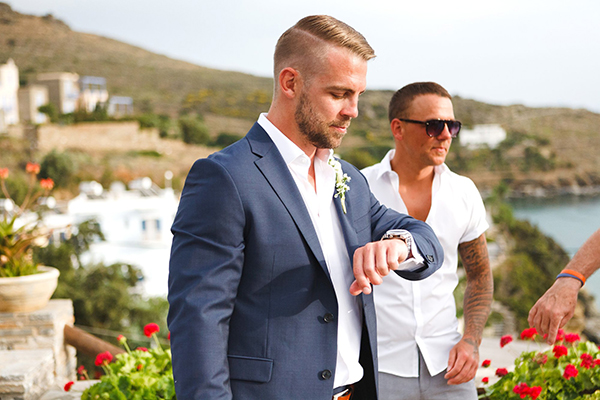 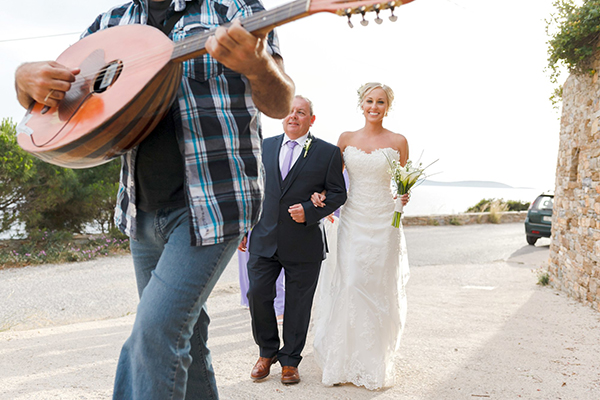 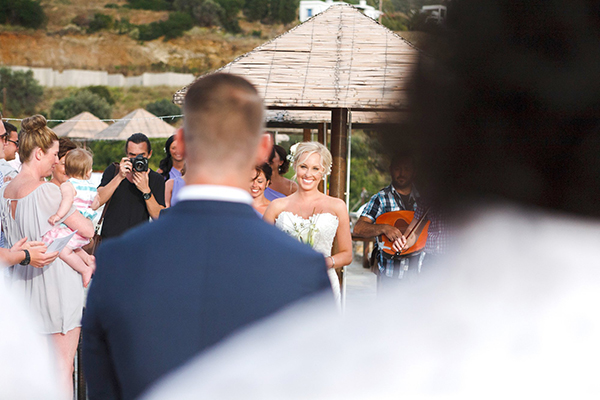 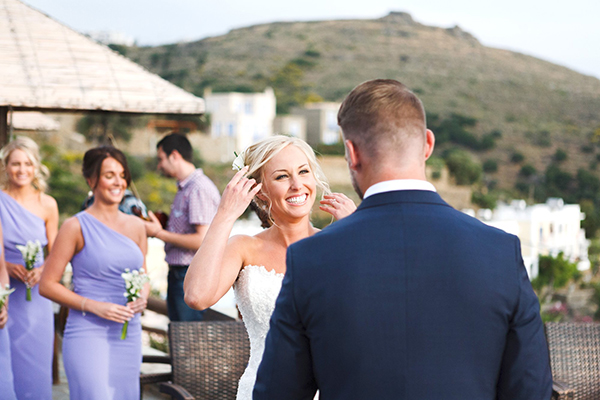 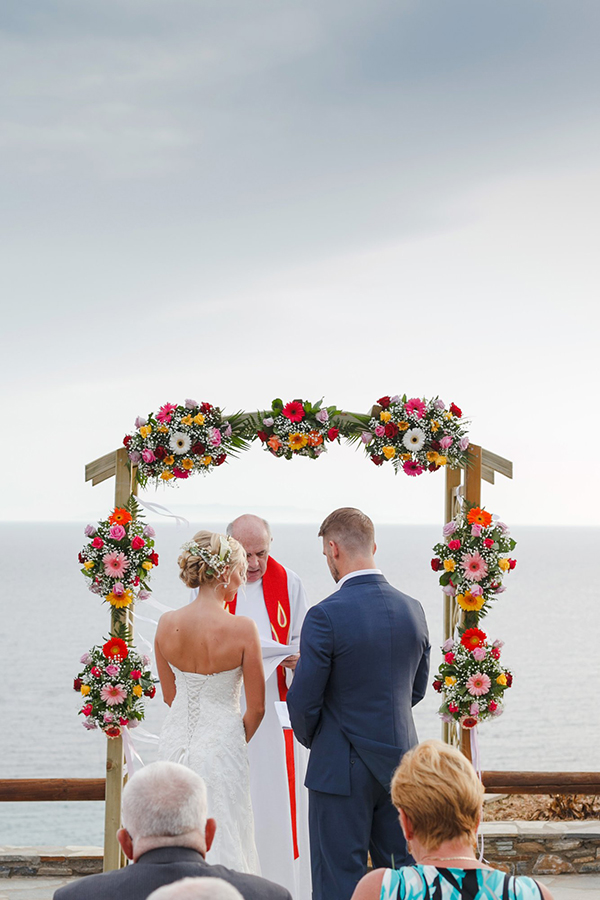 “One of the funniest moments came at early hours in the morning when one of my bridesmaids decided to jump in the pool, in her bridesmaid dress. The venue looked stunning and being able to party until 7am in the warm Greek air was exactly what we wanted. I fully believe if we got married in England it would not have been as much fun and would not have provided us with the exact night that Tom and I were hoping for. If being able to enjoy a holiday with all of our loved ones in Andros wasn’t enough, we also got to share the most wonderful day of our lives with them as well”. 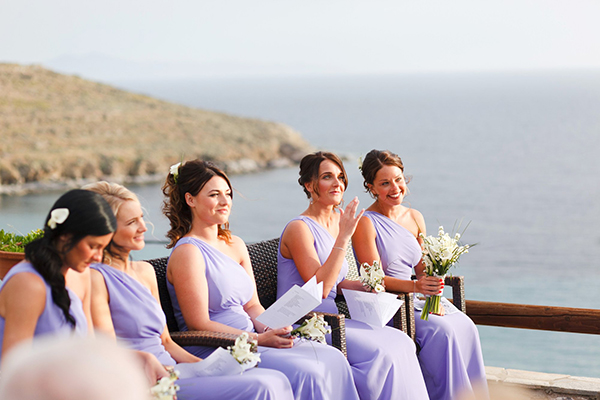 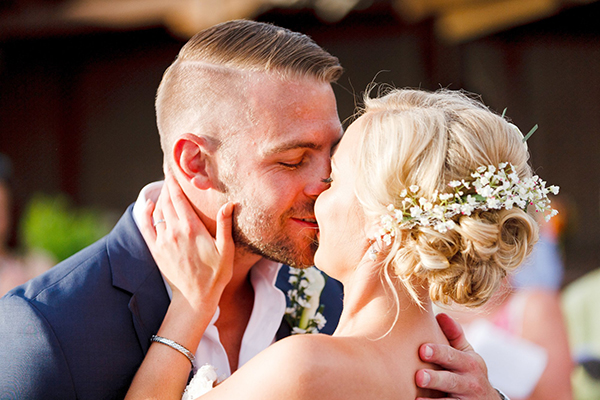 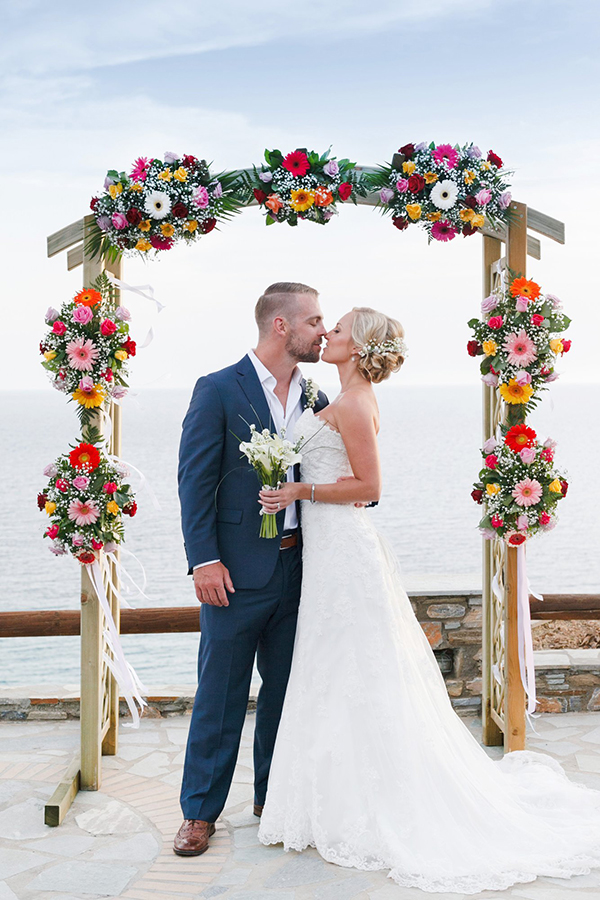 “Our big Greek wedding in Andros was a dream come true and I would do it all over again, any day of the week if I had the chance!” 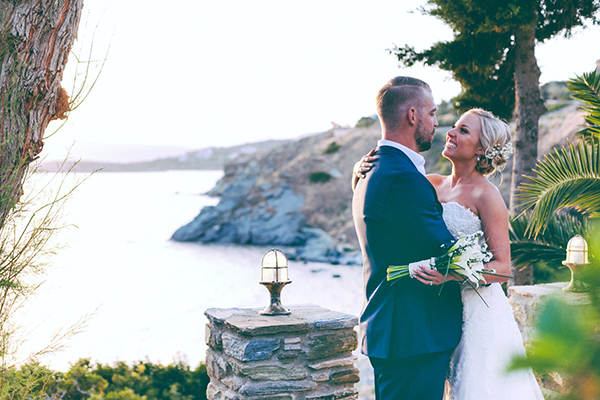 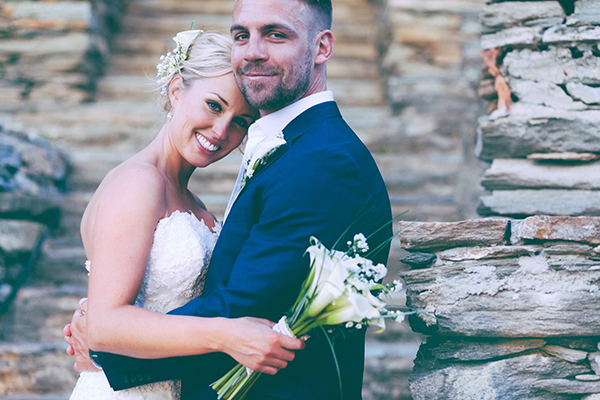