If you fancy yourself some al fresco reception inspiration and perhaps some beach wedding romance too, then you should see this beach wedding beautifully planned by Lefkas Wedding. Nadya and Kosyo found the perfect beach location for their wedding celebration located in Ionian island of Lefkada and it was oh-so-beautifully decorated with various blooms in pastel colors. «The decoration was a beach elopement. The bouquet and the floral decorations were in modern style, with pastel colors to look well on the outdoor photographs», the bride shared with us. See every single moment in the following photos and prepare to get inspired for your beach wedding!

Lefkas Weddings shared with us: «The groom had contacted me at the start of the year wanting to arrange an elopement in Lefkada but the world situation changed and the plans were put on hold. In May he contacted me again and said they still wanted to do their trip when the border opened again on 15 June and could I arrange a surprise ceremony for him for 20 June. Of course, I said yes, it was lovely to get the season started on a positive note and what better to work on than a secret surprise! Bride Nadya simply knew they would have a ceremony and she needed to chose a dress but other than that, all the details were taken care of by groom Konstantin! I suggested a pretty, hidden beach location, which I knew would be private and give them the setting they wanted. Konstantin gave me an idea of the colours Nadya liked and I sent him some floral designs and he picked his favourite for the ceremony and the bouquet. He was keen she should have some special surprises so I arranged an acoustic guitarist to play their song as she arrived at the beach and both being wine lovers, he chose to have the wine box ritual as part of their ceremony. With our help, he took care of everything and Nadya enjoyed a relaxing day and the pampering of a hair and makeup artist as she got ready for the ceremony. The ceremony I wrote especially for them, created around their story so far and their importance to each other. I then had the ceremony translated into Bulgarian for them which made it more meaningful for the vows and promises. They finished the ceremony sealing a bottle of wine into a box to be opened on a future anniversary and celebrating with drinks and delicious wedding cake on the beach.

Six years ago Konstantin started a new job at the finance company they both work at, and there he met a very cute and affable girl who although liked his jokes, was not very impressed by his first flirtation attempts! However, attracted by her genuine behaviour he persevered and a few years later she told us that he won her over with his sense of humour and good attire on casual Fridays! As the New Years Eve fireworks ended in 2019, he made the evening a double celebration by asking Nadya to marry him. This was followed a few weeks later by the happy news that they were expecting their first baby.  This romantic couple found the feeling that they complete each other, and understand each others’ emotions both trying to put the others needs ahead of their own. As neither is fond of large weddings, they chose an intimate ceremony in Greece to make a commitment to each other.  One of their wishes together is to discover all the Greek islands, and they started by leaving Lefkada the next day, island hopping over to Kefalonia for their honeymoon!»

From the bride: «We were married in summer in a secluded beach near Vassiliki, Lefkada. We met at the office. We were both working for the same company. The bride was taken at first and not particularly impressed by the groom’s flirtation attempts. Proposal came on New Year Eve 2019 – just after the fireworks. We were in a relationship for approximately 1 year and a half at this point. It is also worth mentioning that the would-be bride was several weeks pregnant with a baby at this point, but we did not know that when the ring was purchased».

«The location setting was perfect. A small pebbled beach with no visitors – just us in our special moment. We had left the location choice to our wedding planner and have only seen it on photos prior to the special day. The wedding was also organized in a record short amount of time, so at times it felt surreal. But when we arrived and saw the decoration and the warm sea in front, when the music started playing, the feeling was really overwhelming as it looked exactly as we had dreamed it».

«Regarding with my wedding dress, we only decided to do the Greek beach wedding two weeks before the date. With stores closing due to the pandemic, there were only two criteria that had to be met – white and short».

«Our original plans may have been upended, as most life aspects in general, by the pandemic and the border closures in particular, but nonetheless on a very short notice and with the help of Claire from Lefkas Weddings, we had a very special and romantic elopement, the memory of which should stay with us forever. Special thanks also to our ten months old baby who behaved wonderfully during the whole event and was all smiles during the photo session».

«My advice to a bride-to-be: Finding a professional wedding planner and trusting him/her to make the right choices will greatly reduce the stress and let you enjoy thoroughly your perfect day». 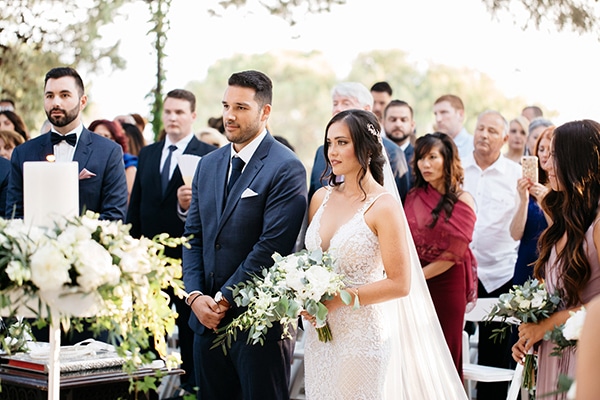 Today’s wedding effortlessly blends elegant and romantic style, leaving us with a wedding that immediately draws the eye and stirs the imagination. Shontal and Akis wanted to wow their wedding guests, so they chose Moments Weddings & Events to take care of …