With vintage style details with sage green accents and the stunning setting of an Italian villa, this styled shoot captured by photographers Ludovica and Valerio, has the perfect dose of beautiful wedding inspiration for you today! 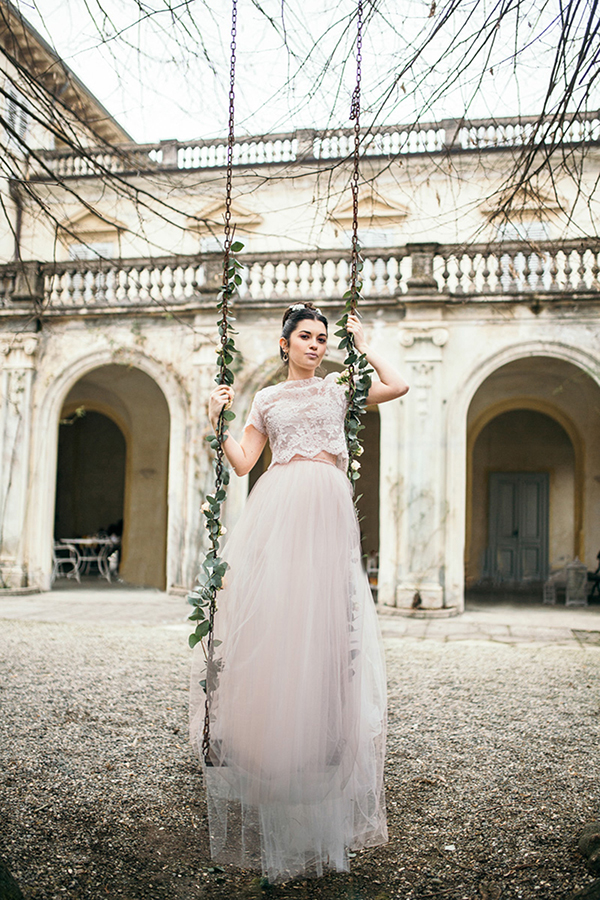 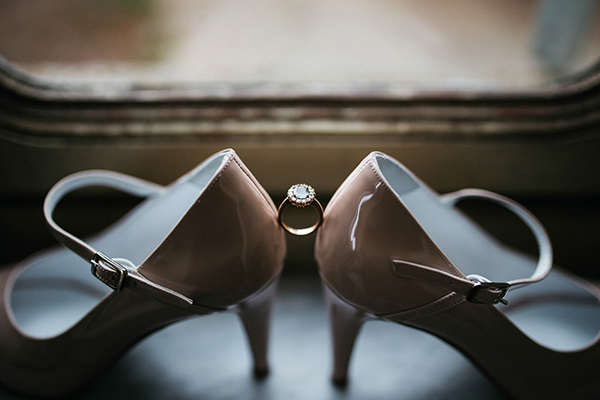 From Ludovica and Valerio: “In the last months a beautiful exhibition titled “Monet and the Impressionists” brought to Turin many Impressionist masterpieces from all over Europe. We were stricken by the evanescent atmosphere of the paintings, which gave us the inspiration needed to start this project. We tried to recreate the “bohemien” feel of life in Paris at the end of the 19th century, and to insert in the shots details recalling to our minds the masterpieces of the Impressionists. We realized the shooting on Valentine’s Day, which looked quite appropriate given the romantic themes of the shooting. The chosen location was Villa Malfatti, a 19th century patrician villa, situated at the heart of a magnificent ancient park in the quiet and beautiful countryside of Piedmont, Italy. The villa features both an Italian and an English garden, a large portico and a splendid ancient greenhouse. Some of the paintings that inspired shooting were: “La balançoir “ by Renoir, with the model elegantly posing on a swing, “Les Danseuses” by Degas for the details of the dress and of the ballerina shoes, and finally Manet’s “Dejeuneur sur l’herbe” for the pique-nique scene and for the wedding favors. The wedding favors, also provided by Camilla, consisted in tiny straw chests containing infusion bags and small marmelade pots. Each chest was sealed with a lace ribbon holding a silver ballerina shoes charm.”

“An important moment of the shooting was the ceremony, during which Cristina and Alberto exchanged the wedding rings. The jewels were designed and relized by Luca Caracciolo from “My Golden Age”. His jewels have a vintage feel about them, while keeping the overall style light and minimal. By playing with the elegant shapes from the second half of the 19th century he realized the red gold and gemstones jewels featured in this shooting.” 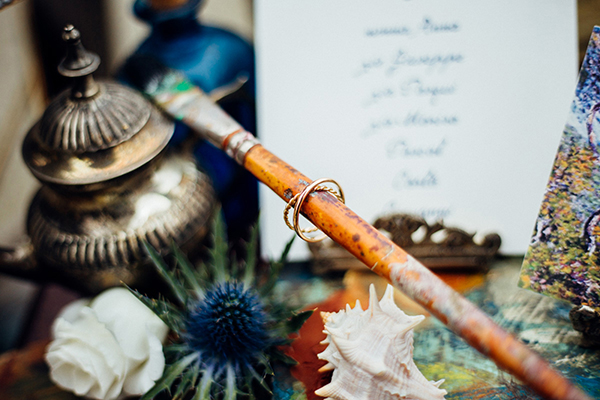 “The color palette ranged from sage-green and dove-grey, with hints of dusty blue and tea rose. The dresses were designed and realized by Maura Brandino and Enrico Pettinà, who own the atelier “Il Sogno” in Turin. Maura did a beautiful job in transfusing the romantic atmosphere of that time into the dresses’ style and colors. The groom’s outfit was inspired by our idea of the iconic Parisan painter, while the bride was meant to be his Muse, the source of his inspiration and the object of his love. For the groom “Il Sogno” realized a dusty blue velvet waistcoat, matched with tobacco trousers and an ascot tie. The bride’s dress turned out to be a two piece: a lace bodice and a tea rose tulle gown.” 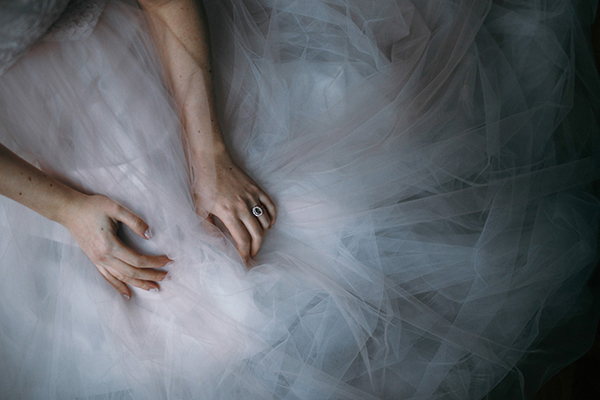 “Simmi realized the invitations typography inspired by Monet’s “Nymphées” series. Camilla’s mother painted a water lily in each invitation with the watercolor technique. The “Tableau de mariage” was a composition of small paintings and antique objects, arranged on a wooden board placed on two old folding stairs. This composition is meant to recreate a tiny corner of a painter’s studio. Each table is named after a place strongly related to Impressionism, such as Giverny, Bordighera, Le Havre Harbor. The spouses’ table featured small dusty painting pots, each holding a single flower.” 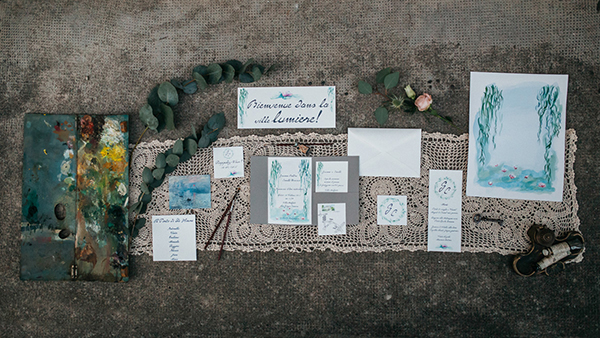 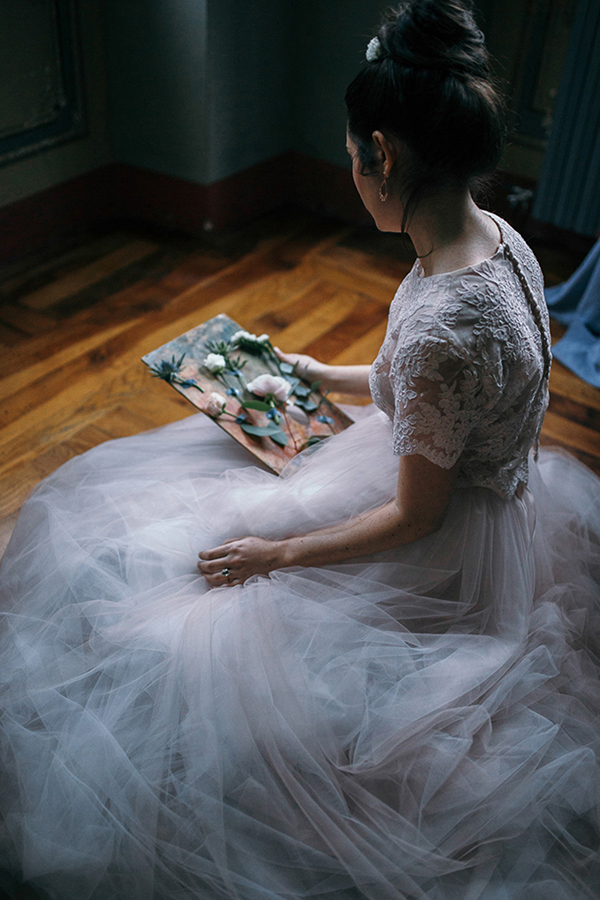 “Make-up and hairstyle were in the capable hands of Rosanna Curci. She found her inspiration by studying many Impressionist paintings, and her work was deeply influenced by Monet’s use of colors in his “Houses of Parliament” series. As for the hairstyle, she was inspired by several different paintings of that time.” 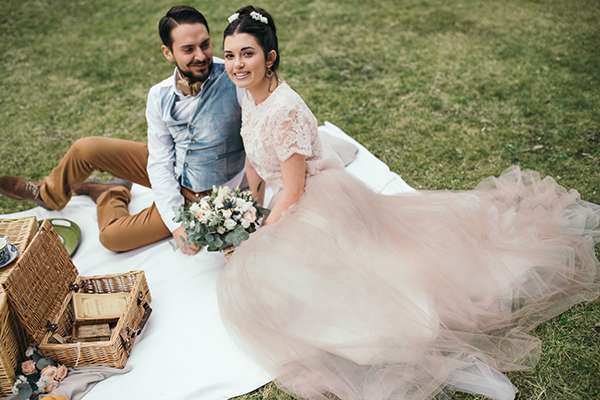 “Simmi Floral Design, a renowned workshop based in Turin, provided and set up floral compositions and decors. Simmi’s Camilla Marchetti aimed at realizing a fresh boho chic setup, taking care of the tiniest details. She chose simple flowers and arranged them in sparse yet elegant compositions. Every type of flower was also chosen for its meaning: the small pale roses and white lisianthus with buds both mean well wishes for a future family; eucalyptus has a delicate scent and signifies protection. Camilla also used eringium and sea lavender, whose shape reminded her of a brush stroke. Sea lavender was also included into the hairstyle by Rosanna. The bouquet was simple, natural and romantic, and was composed as if flowers were picked by the bride herself in the woods. The setups were riched with details referring to painting and art: brushes, colors, frames, palettes, old books, easels for en plein air painting. Many of the objects were real vintage tools used by Camilla’s great-uncle and now by her mother.” 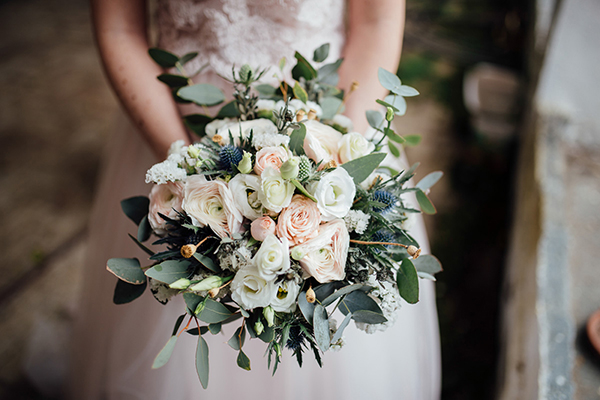 “The photographers, Ludovica Lanzafami and Valerio Elia, chose a real life couple rather than professional models, in order to capture more realistic emotions and feelings: it takes just one look at the photos to see that Cristina and Alberto are truly in love.The two models were prepared separately and didn’t see each other beafore being ready for the shooting: in this way the photographers could catch their fun and emotions in the first sight.” 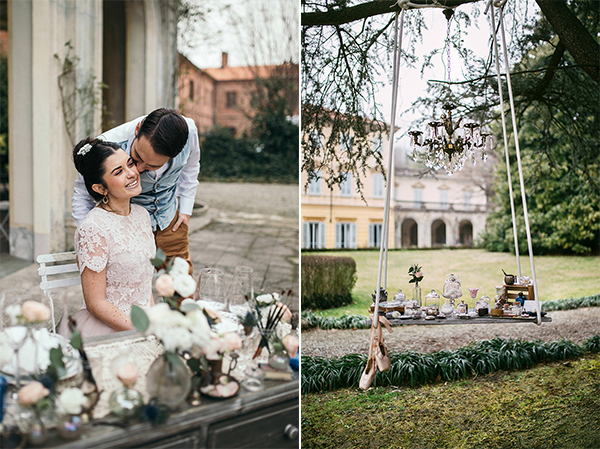 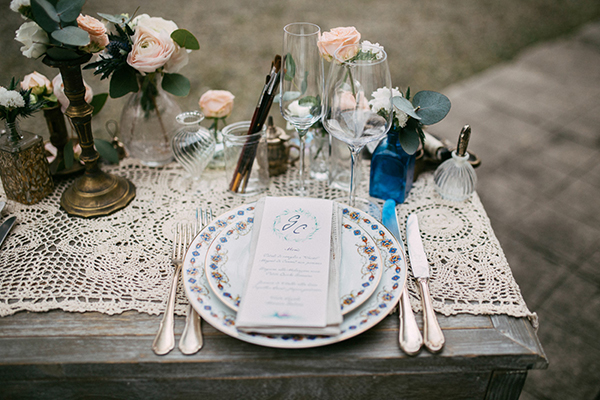 “The cake was created by Francesca Molon’s “Agripasticceria Dolcemente”. Francesca used the sugar paste exterior of the cake as a canvas, painting it with strokes of food coloring used as watercolors. On the cake were also painted the initials of the spouses, in the same fashion as the invitations. The cake was placed on a painter’s sketch box easel and small white lanterns were hanging above it.The last part of the shooting took place inside the Villa: the photographers made use of the last moments of light, which revealed the beautiful details of the bride’s tulle gown.” 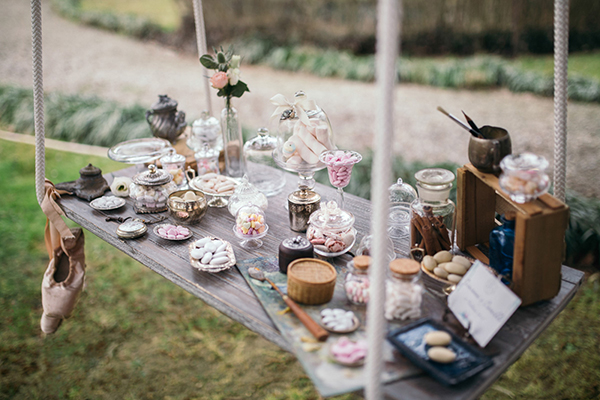 “The rounded shapes, delicate colors and rough manufacturing of these jewels are meants to be a homage to Impressionist style. The photographers also realized a few romantic portraits of the bride and groom in Villa Malfatti’s greenhouse, taking advantage of the soft light and the beautiful backdrop of the lemon trees. By shooting both inside of the greenhouse and from the outside they realized two different series of portraits, the first one is romantic and filled with light, the second one is rather mysterious and ethereal.” 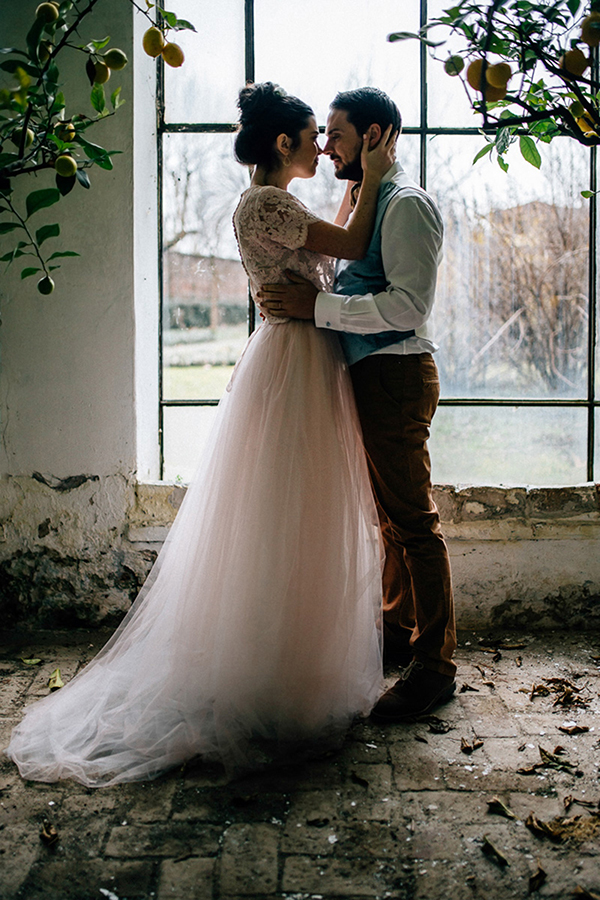 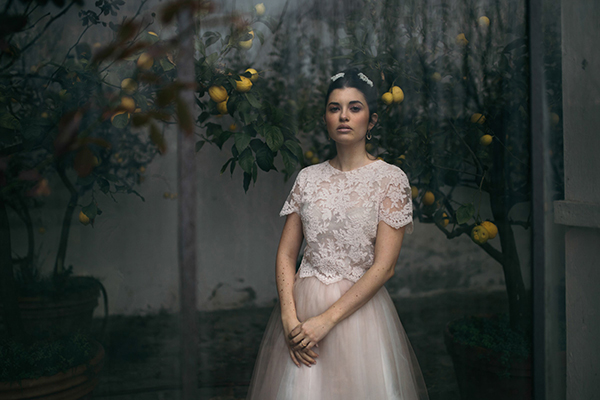