We are sharing today a beautiful engagement session in Tuscany that will mesmerize you! The lovely couple chose to have the shoot at their own house, a 15th century castle, and there is not doubt that a more picturesque and beautiful place would have been hard to be found! Have a look at the gorgeous photos of the couple captured beautifully by George Liopetas Photography and be transported to the stunning Tuscan countryside! 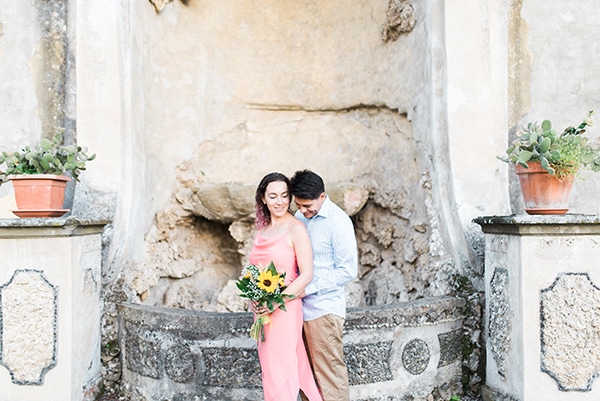 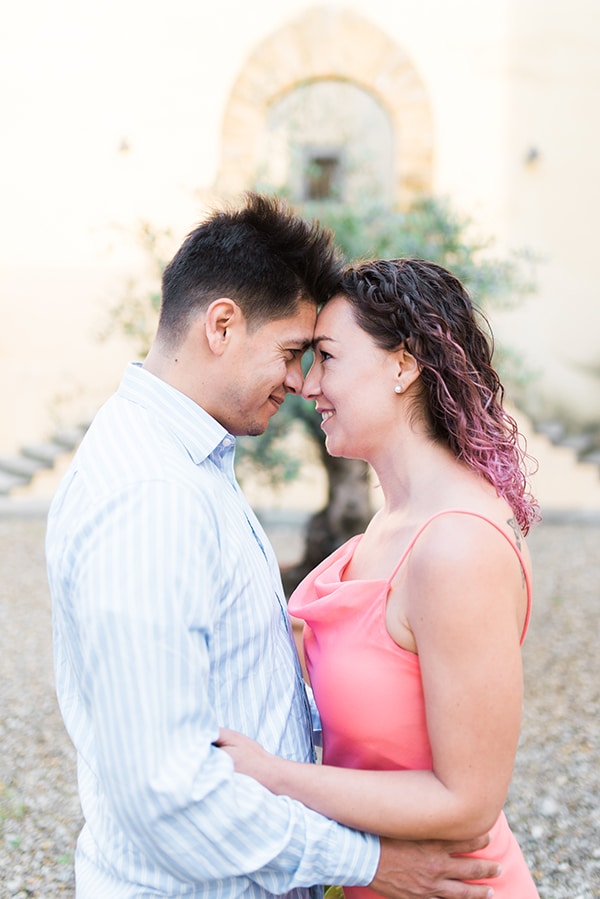 The bride-to-be shared with us: “Javier and I met in the most unlikely place. I was working on my master’s degree in Los Angeles and found myself working at a barbecue restaurant, with less than 6 months experience as a waitress. As a chef of 20 years Javier never thought he’d work a simple line cook job, but he needed something simple to get by while he was also in school. When we met we were both dating other people. I was dating an ER doctor that thought he walked on water. Javier was enjoying internet dating and hadn’t wanted to settle down. We became fast work friends and discovered we lived close to each other which is rare in LA.” 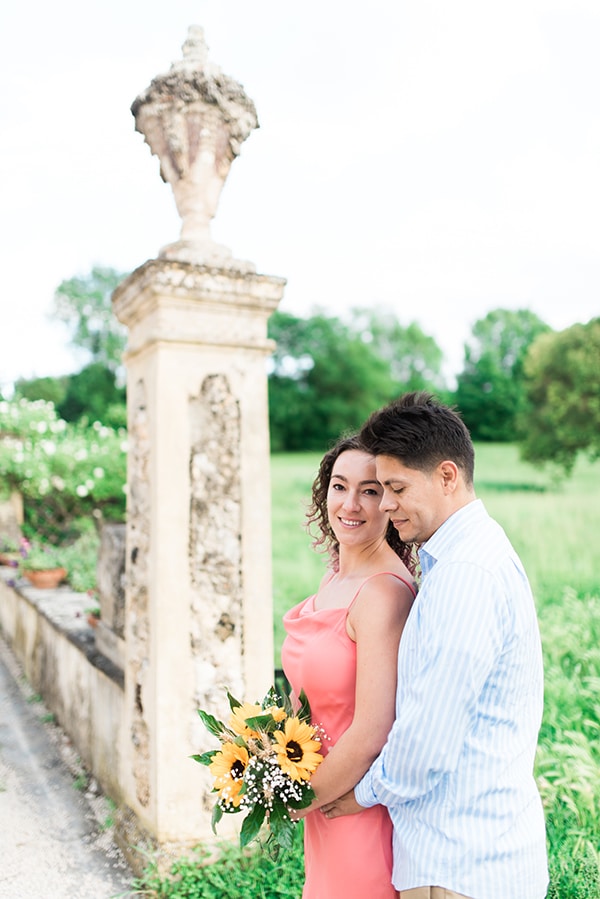 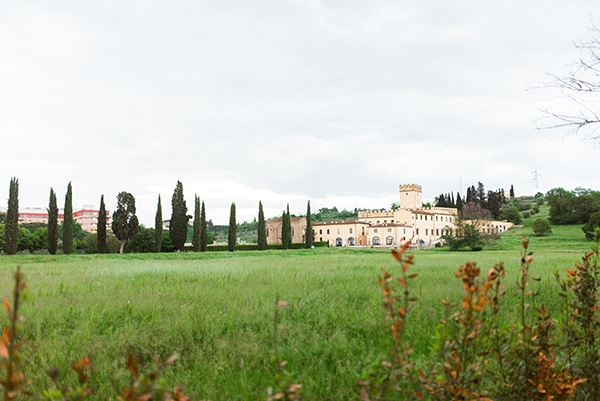 “In no time at all he became my best friend and I realized he knew me better than my own boyfriend. Not long after my boyfriend and I broke up. The breakup was a bit ugly and I had sworn off dating men completely. Javier and I started to spend even more time together. About 3 months after the breakup something shifted with our friendship. I realized my heart was calling for him. I was no longer able to be just his friend. When I got the courage to tell him, he smiled and said he felt the same way. That was the first time we kissed. 2 years later, while on holiday, he asked me to marry him as we were watching the sunset on the beach”. 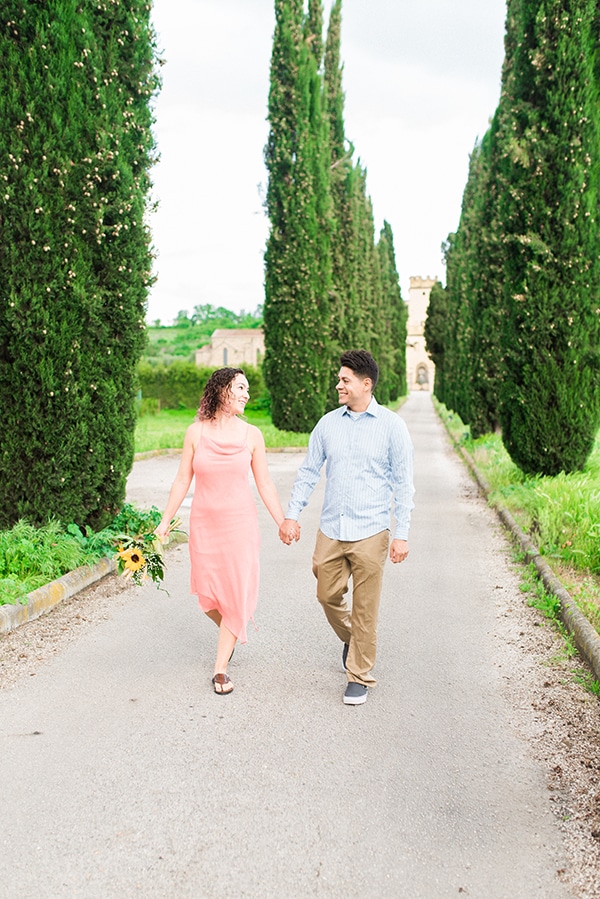 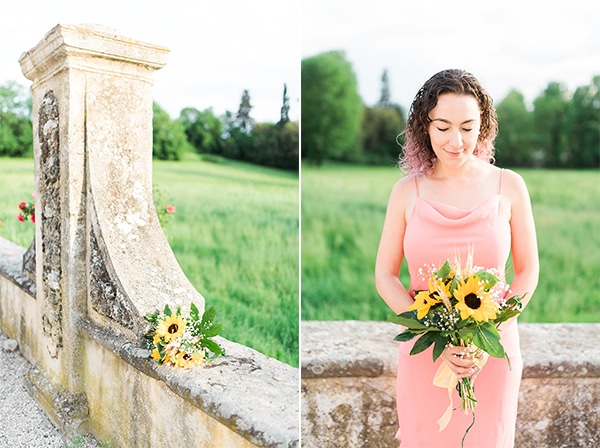 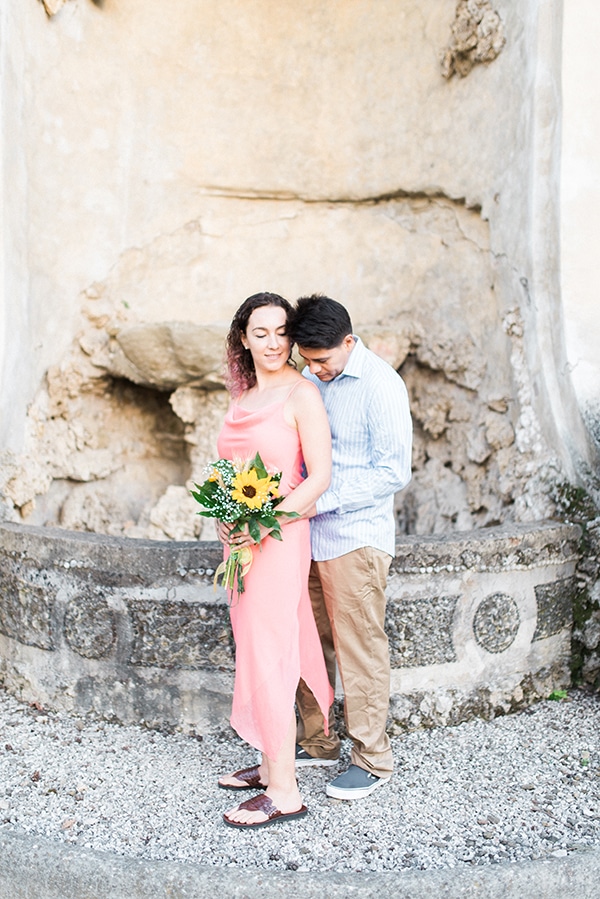 “We had such a great time with George Liopetas Photography during our shoot. His passion for his work is present in every photo he takes. He guided us to ensure our best moments were captured. It was truly an amazing experience. The location was at our home in Tuscany making the shoot even more special for us. We live in a 15th century castle outside of Florence, Italy that takes our breath away every time we see it. My favorite part of the trip was our candid moments when we forgot about the photographs, shared whispered secrets and got lost in each other’s eyes”. 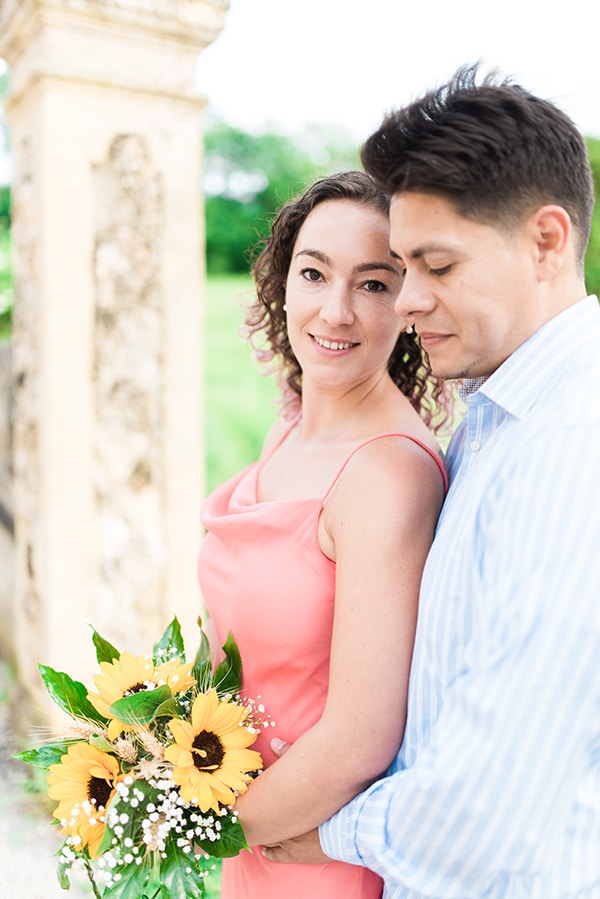 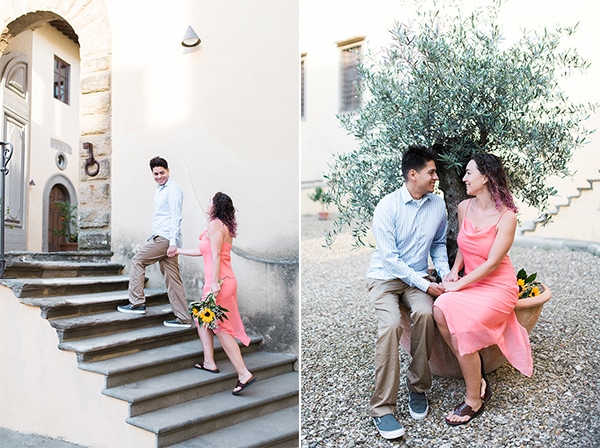 From photographer George Liopetas Photography: “When you think of Tuscany, you may imagine old charming towns, rolling hills, old vineyards, castles and olive trees. This engagement shoot combines everything mentioned above. Even more exciting is the loaction, Castello di Torregalli, a castle built back in the 14th century where ‘royal blood’ used to live inside. This medieval castle has a timeless charm and when sunset approaches, the sun seeps on through the lanes, painting the old stone walls with the beautiful Tuscan golden light. But what sweetly made these pictures ‘stand out’ in my eyes was the sweet personality of Briana and Javier. Romantic gesticulations, whispered words, steps walked hand in hand through the valleys of their castle… I can say I breathed love during the whole session. And so, shooting, making jokes, discussing traveling and laughing, time literally flew by.” 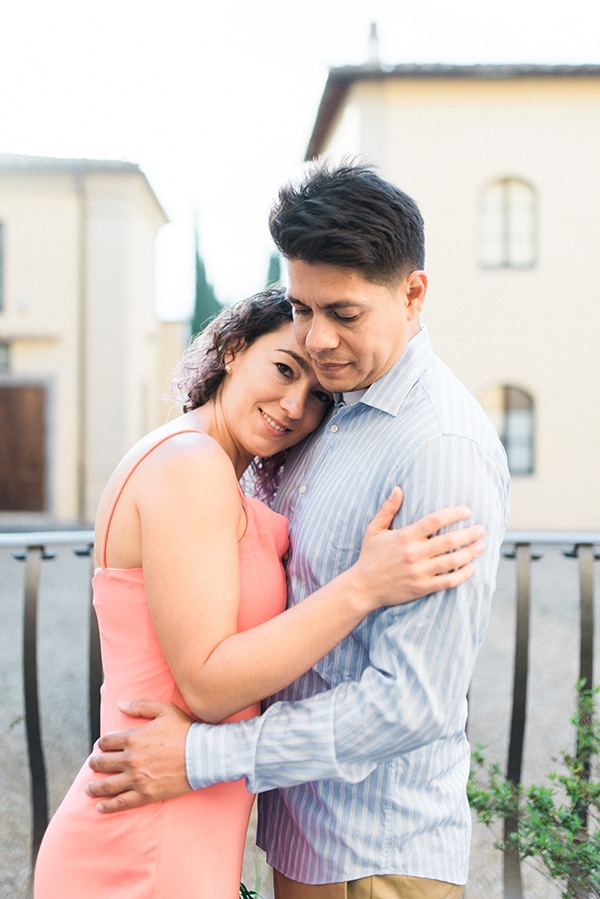 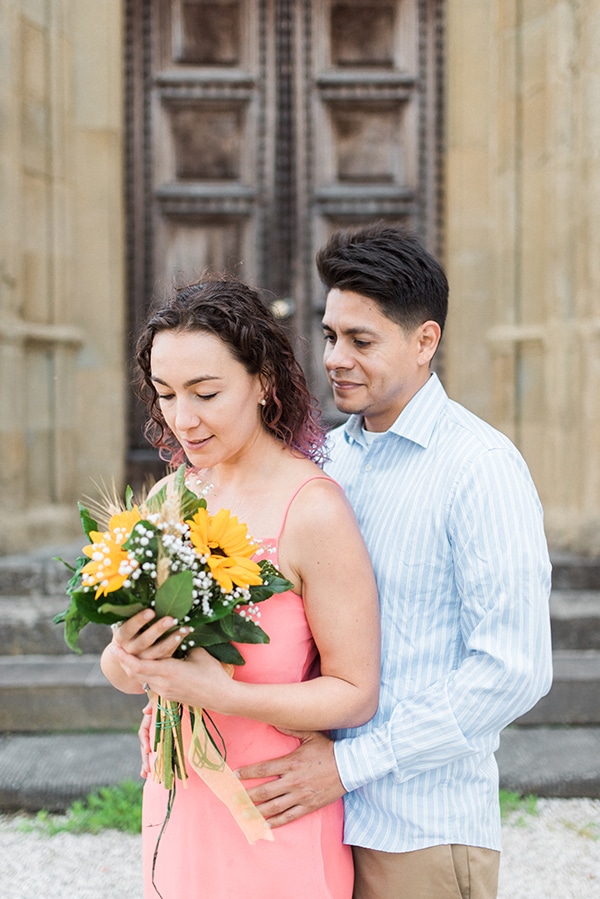 “Briana and Javier are both from California. They are passionate about travelling the world, cooking, tasting different kinds of food and experiencing new cultures. Having travelled the whole globe, as owners of the successful travel blog ‘A dash of life’, they decided to stay for the next few years in Florence and Castello di Torregalli, which they own, and get inspired for their future trips.” 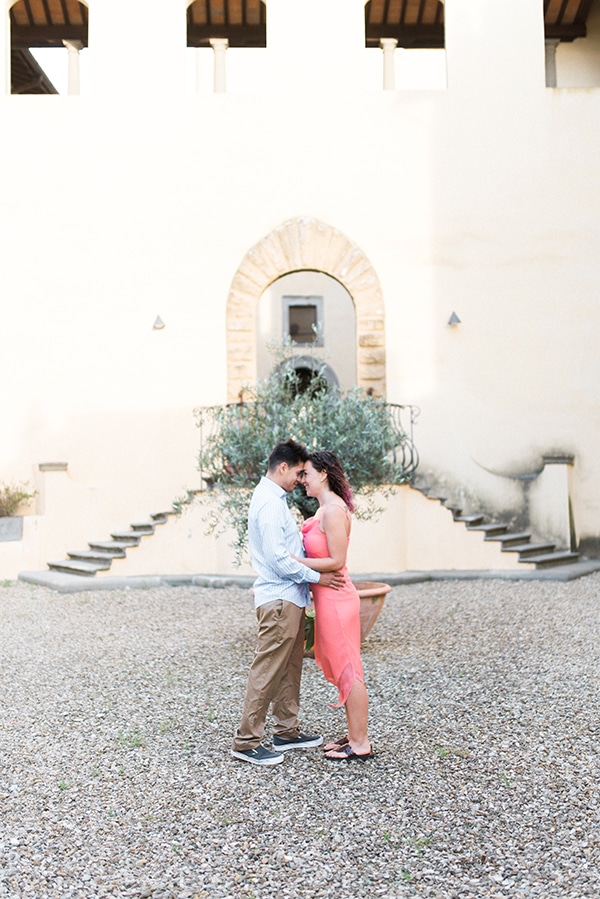