Christos Costarellos is a Greek designer with an innate talent for delicate feminine creations. His designs combine elegance and refinement with a neo-romantic character, tastefully incorporating iconic vintage references and the timeless beauty of the past into the present. Christos Costarellos is considered to be one of the most successful bridal and prêt-à-porter fashion houses in Greece.
Christos Costarellos was born in Dusseldorf, Germany and was introduced to the fashion world at an early age, as his parents were both working in the fashion industry. He studied fashion design at Dimitrelis School of Fashion in Greece and then theater costume design at the London College of Fashion in England. In 1998 he launches his personal line and within the next 14 years the House of Christos Costarellos is created and established in the Greek and international market. Forever dedicated to the craftsmanship of moulage and couture techniques, he blends his love for color with unique bias cuts in his distinct creations of Nouvelle Couture. Inspired by the spirit of the ancient Greek philosophy, he infuses a breath of fresh air into his creations, thus creating movement and flow. Two fundamental elements that express the designer’s eternal quest for knowledge, evolution and inspiration 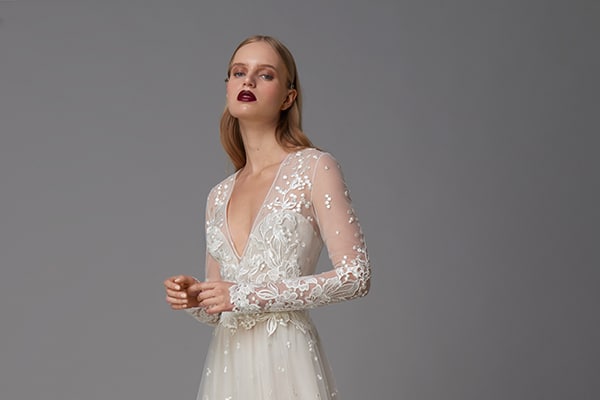 You know what we can never get enough of? Whimsical wedding dresses like theses with French tulle, full of romantic flower appliques and lace details! Rich with embellishments and intricate details, the stories these wedding gowns by Costarellos can tell are like nothing you’ve ever seen before. Unique romantic silhouettes with puff sleeves and victorian lace details, flirty v or … 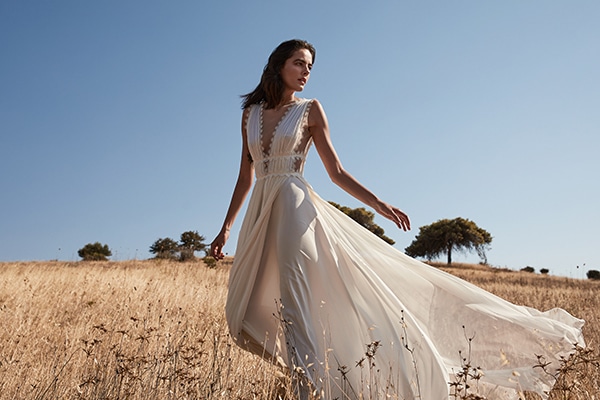 Today we are sharing with you gorgeous wedding dresses that will surely steal your heart! The talented designer Costarellos created stunning creations that combine an ethereal and effortless bridal look. Bridal Capsule Collection 2021 is highlighted by fluid silhouettes that are hand-produced offering perfect bridal gowns for the bride who wants to feel sophisticated and stunning. This stylish bridal collection …

Sunset in Santorini: A Grecian Styled Shoot with the most romantic details 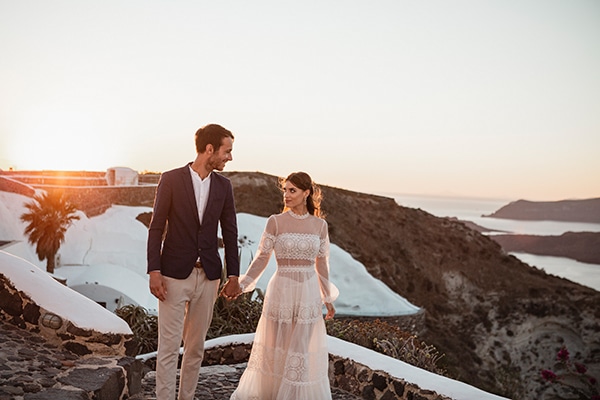 There’s an unmistakable allure about a Grecian styled shoot at sunset… especially when it peppers in such darling details as a white-lilac wedding cake with golden details, a romantic long sleeve wedding gown by Costarellos with unique polka dots and lace embroideries and the most romantic setting with tableware and rentals by Spicy Bites Catering. This sweet styled shoot in … 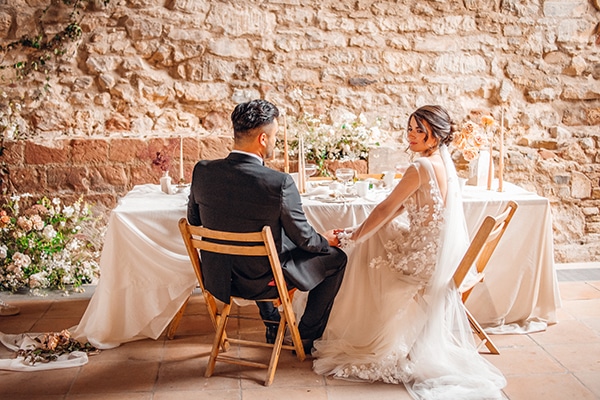 Honestly, today we promise you that you will get lost in all the all the gorgeous details from this wonderful styled shoot! What's not to love about this romantic affair… From the wonderful backdrop at an ancient Monastery, the earthy color palette, to the beautiful dried flower arrangements, the candle lights, the handmade ceramics, this setting was just perfect to … 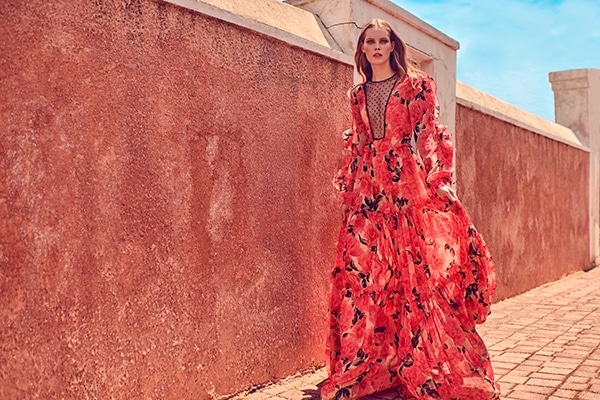 Today we’re sharing luxurious bohemian creations that steal all the impressions! The talented designer Costarellos created once again, super unique and beautiful masterpieces featuring a 70's charm. Inspired by the freedom of expression of the 1970s, they combine different, bold colors and large floral prints. Each creation embraces the woman’s body perfectly and enhance her confidence and femininity. The combination … 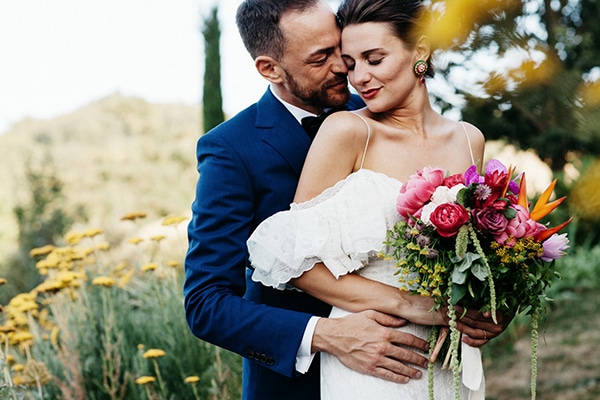 The colorful wedding we are featuring today took place outdoors in an idyllic location, in the Castello di Tassara of Italy. The lovely couple exchanged vows of eternal love with a backdrop of a romantic green scenery… The decoration was impressive and colorful with rustic details! We really loved the stylish and elegant table decoration with a mixture of fresh flower …

The most stylish dresses for bridesmaids 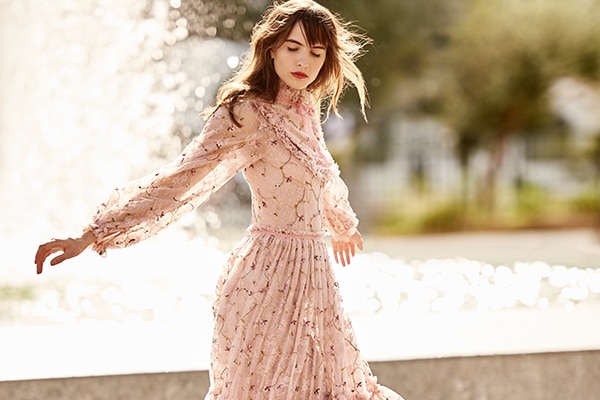 We have fallen in love with the gorgeous dresses from the Spring Summer 2018 collection of our talented and beloved designer Christos Costarellos! The stylish collection has the most beautiful dresses for the bridesmaids who are looking for spring and summer dresses that will impress. Inspired by nature, the collection features leaves, flowers and floral designs in soft tones. With … 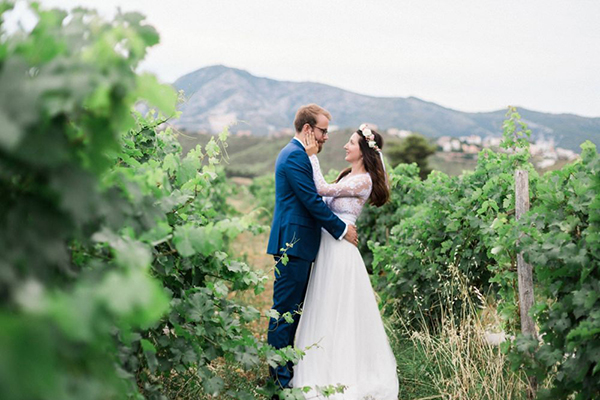 The wedding that we're sharing with you today looks like a movie! These two lovebirds sealed their love in an outdoor gorgeous place that was fully decorated with rustic details and flower bouquets in orange and yellow hues. After the beautiful ceremony, this duo celebrated their love with a sweet celebration in the nature that was adorned with wooden creations, … 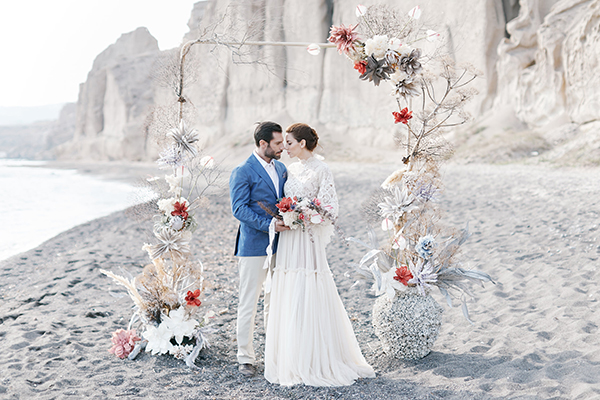 Today, we’re sharing with you one styled shoot straight out of heaven! The photoshoot took place in beautiful island of Santorini and specifically in a private beach spot that was ideal for a dreamy scene like this to shine. The overall styling followed a pastel, natural color palette with light blue, light pink, beige and red hues. A wooden table … 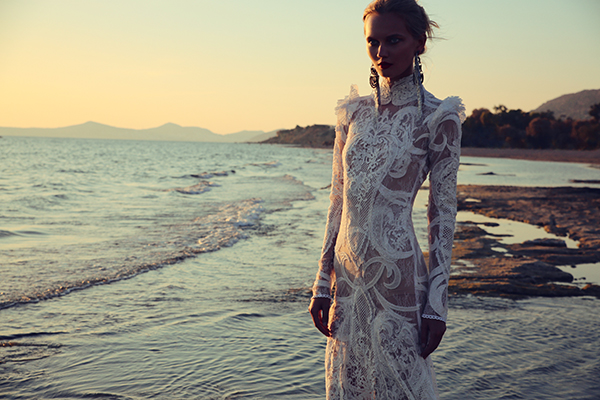 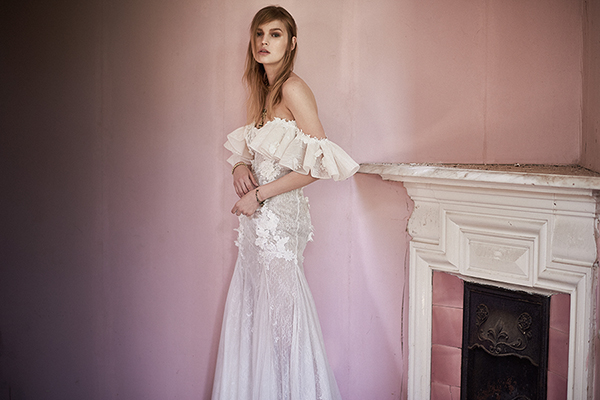 For all the stylish brides out there we are sharing with you today some of seriously stunning wedding gowns from the Costarellos Bridal Spring 2018 collection! The Costarellos wedding gowns you will see today feature intricate lace patterns, floral lace appliques and column silhouettes and they are inspired by the magnificence of the Greek spring landscape, the Greek tradition and history. … 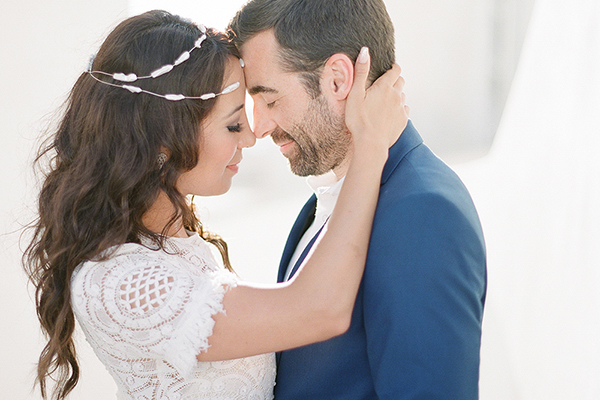 The honeymoon shoot we are sharing with you today from Vasia Photography is just perfect! In the picturesque island of Santorini and with gorgeous Costarellos gowns, we are sure that you will love this shoot! 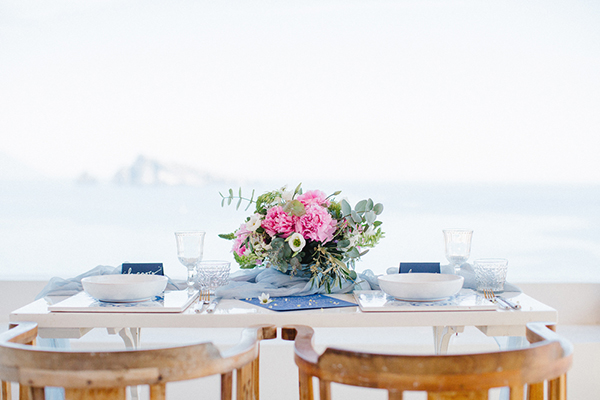 With a gorgeous color palette in romantic shades of cobalt blue and timeless white, this beyond beautiful styled shoot in at the Hotel Raya that is situated on a hillside surrounded by bougainvillea, lemon and olive trees. Sounds incredibly dreamy right? Well just wait till see all the prettiness… and of course we can’t stop swooning over the dress… a … 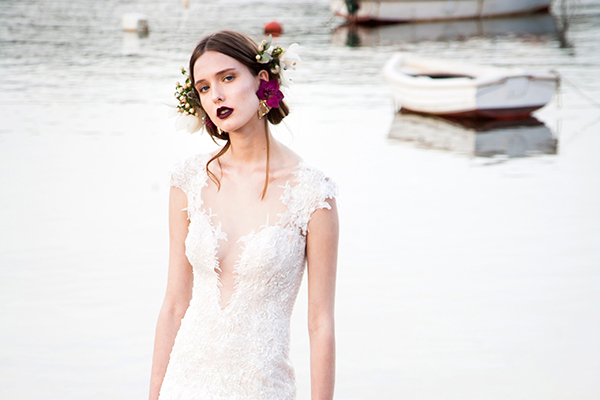 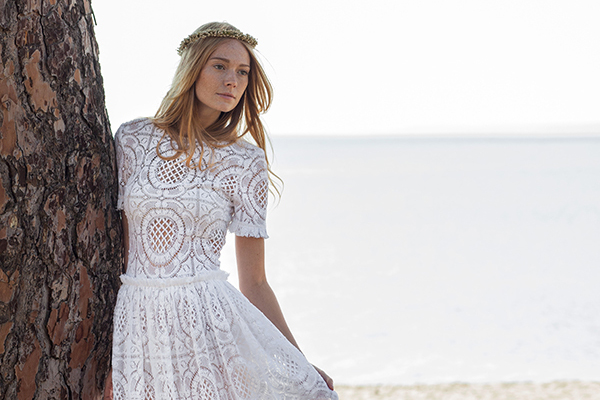 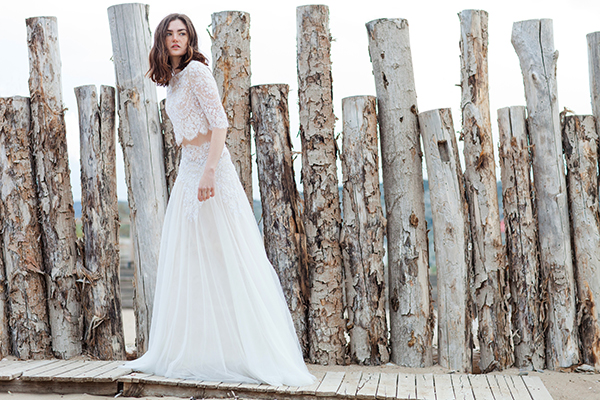 My dearest brides! We are so excited today to share with you the Christos Costarellos 2016 Bridal Collection! The uber-talented fashion designer form Greece, has been praised for his designs globally by both media and buyers, creating an even greater anticipation for this collection. We have absolutely no doubt that brides will adore the 2016 Christos Costarellos wedding dresses with a … 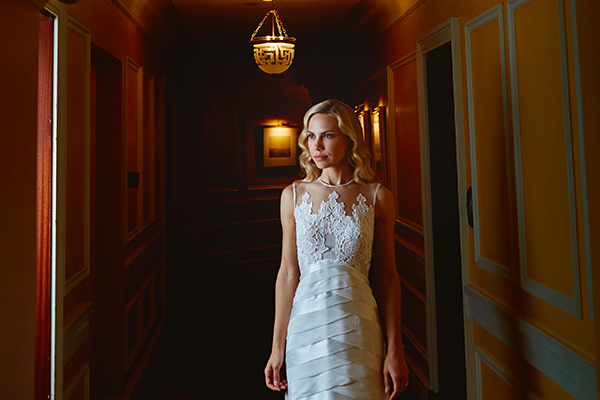 We are beyond obsessed with the Christos Costarellos bridal shoot at Hotel Grande Bretagne and no doubt you will be too! The inspiration for this gorgeous shoot was influenced by the uber-luxurious surroundings of the landmark hotel that offers an unrivalled perspective of Athens' mythical history. Photographer George Pahountis captured brilliantly every detail with perfection. You will be completely forgiven … 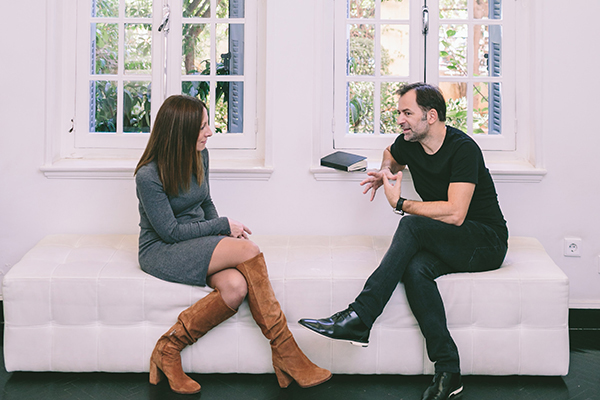 The first time I laid my eyes on a Christos Costarellos wedding dress, it took just a few moments to become infatuated with his designs… wildly romantic, ethereal and so incredibly chic. Christos Costarellos wedding dresses combine elegance and refinement with a neo-romantic character, tastefully incorporating iconic vintage references and the timeless beauty of the past into the present. And… … 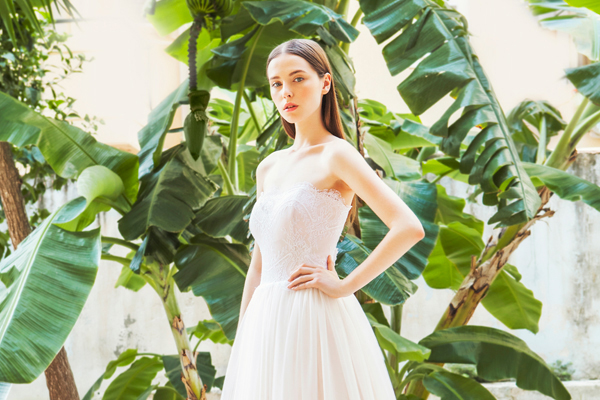 Stunning doesn’t even begin to describe the new Christos Costarellos wedding dresses… They are wildly romantic, ethereal and so incredibly chic that it is truly hard not to fall in love with every single one of his designs. The Bridal 2015 Collection by CHRISTOS COSTARELLOS is… breathtakingly g-o-r-g-e-o-u-s! It successfully combines elegance and refinement with a neo-romantic character, tastefully incorporating iconic … 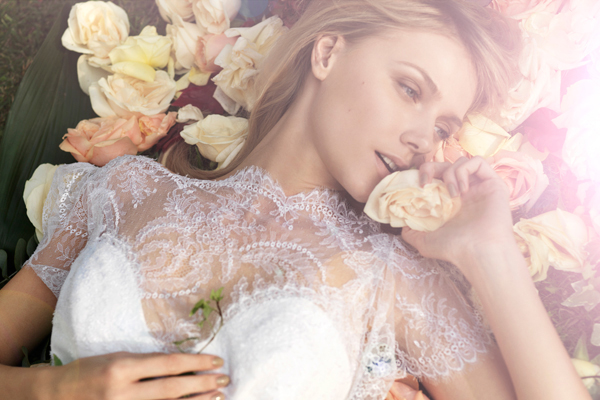 Be prepared to fall head over heels in love with the loveliest wedding dresses by Christos Costarellos. They are romantic, ethereal... made from silk tulle and Chantilly lace…Absolutely gorgeous! Transparent airy wedding dress…the top is made out of delicate lace trimmings, while the skirt is made out of 27 meters of soft tulle. Impressive! The new bridal collection has dresses from transparent …